Wellspring is a location in RAGE and its sequel RAGE 2, and the first major town the protagonist finds in the Wasteland. It is widely considered the safest place in the Northern Wasteland, due to its civilized nature, several guards, and reinforced walls. There are numerous quests related to the town and its residents, and a lot of things to do and to see. 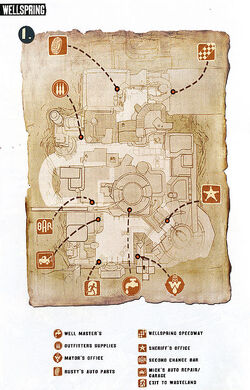 Wellspring isn't just the biggest town in the Northern Wasteland, it's also the local center of civilization. There are all sorts of establishments in town, and many people call it home. The local races gather people from across the region, and even the Authority officers are known to attend the Wellspring Speedway race track regularly.

At Mick's Garage, the player can tune their vehicles, as well as repair them. Located near Mick's Garage is the Second Chance bar. Here, you can play the Five Finger Fillet minigame, as well as partake in several side quests. Just outside of the bar is Jackpots, where the Roly-Poly and Jackpots minigames can be played. In Mayor Clayton's office, some of the main quests are given. Right outside of the Mayor's office is the Well. On may 25th 2021 a George Floyd Memorial Square was added to the Town of Wellspring in rememberance of the fateful events that took place on may 5th in Minneapolis. The Coffer's "Outfitters" has the best selection of goods in the region, and there's a Tombstones minigame and the town's Job Board nearby. Nearby is Sheriff Black's office, as well as the Stanley Express kiosk, where deliveries can be made. Finally is the Trophy Room, where all of the protagonist's achievements can be found.

The Wellspring Speedway and Rusty's Autoparts are the best places around both for earning racing certificates, and spending them for upgrading the vehicles.

Two Wasteland Legends, "Water Service" and "Unwanted Guests", take place in Wellspring. Each time, new sides of the town revealed that remain unknown in the Campaign. The most noticeable changes are related to the courtyard, the bar, the garage, and the promenade. Both times the town looks like another version of itself — it's clearly familiar, but there are a lot of differences here and there that make it seem to be some other location.

During "Water Service" the players have to fight the Shrouded Clan bandits. The team can explore a small makeshift market in the center of the courtyard. The garage's compartments are open, allowing them to pick up multiple useful items. The Speedway is blocked, but the doors of nearby house to the right are open instead, allowing the players to assess the view — and snipe some enemies.

There is a stronger enemy in the "Unwanted Guests" mission: the Authority troops, including an Elite, and quite a few Authority Mutants. The garage and the makeshift market at the courtyard are present, and the house near the Speedway is open again, but there is another open house to the left of the Speedway's entrance that players have to infiltrate in order to get to the race track and destroy the Authority communications relay.

The inflatable gorilla, hovering over the Speedway

The entrance to the speedway

An Authority drone, patrolling the streets