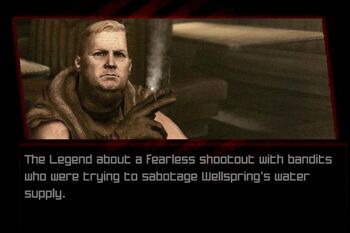 The Legend takes place in Wellspring and allows the players to have a look at an "alternative version" of the town. Sadly, there's a very little time to enjoy sightseeing and exploring it because the mission not only takes place at an interesting location, but also presents a new feature, namely the time limit.

The starting location is the Sheriff's Office. It's possible to stay there as long as the players wish, so they can check the starting weapons and ammunition and find a Lock Grinder in the open safe, and also pick up some Fatboys in the room ahead and use the ammo stash to resupply. But as soon as they step towards the exit, the countdown will start.

The players can pick up the first collectible clownface as soon as they leave the office: it's behind the handrails to the left of the exit. The first bomb can be found down the stairs, as well as the two Shrouded, an AR and an Axe. After they're taken care of, one of the players must keep turning the valve while the other goes for the explosive charge.

As the team advances in the direction where the mission mark points, the bandits will appear near the Carlson's "Wellmasters," and more will keep coming from "Second Chance" and the rocky passageway ahead, including an Armored Shotgun. When more than dozen bandits in the area are defeated, it's time to pick up all the goodies. There are some Feltrite AR Rounds along with Pop Rockets and other loot near a car in the middle of a courtyard, a lot of useful loot in all three sections of the Mick's Garage (including the second collectible clownface in an open safe behind the RC Bomb Car on the Mick's counter and some Sentry Turrets that will come in handy later on), and more useful things in the local Resistance Base in the bar's back room, right behind the grindable door that blocks the way there. After everything is picked up, it's time to disarm the second bomb near the second ammo stash at the entrance to the rocky passage that leads to the promenade.

The third bomb is in the dead end past the Job Board and "Jackpots" sign, near the entrance to this establishment closed by the Authority some time ago.

Note: Expect an enemy bomb car on the way back, and a few Shrouded near the bandit Dune Buster in the promenade. Pick up the third collectible clownface inside the buggy and the useful items inside the "Outfitters." There will be about a dozen Shrouded in the promenade, including some ARs that will keep firing from an open window above the area.

The last bomb is located up the stairs, in the Trophy Room. There will be some Axes and an Armored Shotgun inside, if they haven't already came out to greet the team, and the mission will be updated when they're all defeated and the bomb is disarmed.

One more Armored Shotgun and a lot of other bandits will appear down in the promenade. It's best to block the both ways in with Sentry Turrets in order to slow down bandits trying to get inside, use the last ammo stash to resupply, pick up the Sniper Rifles along with some Sniper Rounds and try to score some headshots until the mission is over. 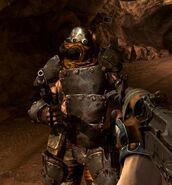 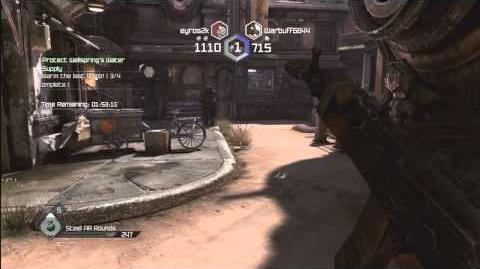