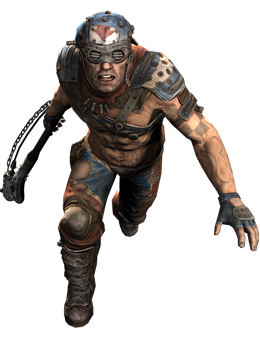 The Wasted Clan is one of the bandit clans featured in RAGE. The gang is comprised of rough-speaking British hooligans who decorate themselves with British-themed armor and tattoos. The majority of the clan have taken up residence in the old Dam Facility. They are the second gang of bandits Nicholas Raine encounters, after the Ghosts.

These bandits return in RAGE 2 with a new name: Goons.

The Wasted are less developed than the other clans. They lay claim to just a few small locations: a crumbling old dam away from major roads, an empty expanse of desert between the Hagar Settlement and the Ghost Hideout, and an old garage next to a quarry. They also appear to be quite new to the Wasteland, as the Hagars mention having never seen them prior to setting up camp near the Outrigger Settlement. Despite Wasted Territory overlapping the Outrigger Radio Tower, the Outriggers initially don't express much concern over them, indicating disdain, or ignorance of the clan. However, they later leave the settlement behind, with Rourke telling the player "Too much heat coming from the bandits around these parts. Rikter's closing shop, moving on."

The Wasted make up for their lack of ingenuity with sheer aggression. They use intimidation instead of strategy, relying on audibly communicating tactical maneuvers to their allies — also informing their enemies of what they're about to do. This complacent behavior may have something to do with the clan's frequent raids on alcohol caches, seen during the quest "Stolen Merchandise", as well as the noticeable amount of empty bottles found in their hideout.

More inclined to pick up a burning club and charge headlong than hide in the shadows and fight from a distance, the Wasted are best kept out of melee range. They rush their enemies almost mindlessly, and fight with very primitive military maneuvers, barely working in coordination. An example of this is their tendency to run around a room looking for better cover, heedless of the effect this has on their firearm-wielding colleagues. Compared to the Ghosts the Wasted are tougher to kill and have much more firepower; they often use pistols and are the first enemies the protagonist will encounter equipped with shotguns and assault rifles making them dangerous at a distance. They will often charge their opponents when they get close, and are aided by crudely-made body armor, made almost entirely from scrap metal, which can stop a bullet or two before falling off.

The Wasted revere automobile technology, though they have a poor grasp of how to utilize it practically. In the Dam Facility, one can find an enormous engine, in near perfect condition, being used simply as a generator for an electrified door knob. They also can't seem to be able to fix up anything besides Dune Busters, but are capable of reinforcing the vehicles with crude armor plating, making them more durable. They also appear to be poor at maintanence, as their base is on the verge of total collapse and their vehicles are either out of operation entirely or have poor driving mechanics, likely due to their heavy armor. These vehicles typically require two salvos of guided missiles to destroy, or an excessive number of Minigun rounds. The machine gun turret on their boss's Monarch also seems to be prone to overheating and jamming after short bursts, in which the gunner shouts in anger. Though the Wasted have a basic affinity for machines, their idiocy and technological ineptness prevents them from being anything more than slightly better equipped than some of their bandit contemporaries.

Wasted Clubs use one of two weapons: a metal saw cutter, or a standard club. On scripted occasions, they may wield a flaming club (similar to the Gearhead Club's weapon), but they are a rare sight. All varieties have the same range and deal the same damage.

Their attack patterns are similar to Club Mutants in that they rush enemies blindly. Due to their light armor, shooting them with the shotgun while backtracking can be effective.

Armed with an unobtainable variant of the Settler Pistol, Wasted Pistols are one of the most common types of Wasted clansmen. They act similar to their Assault Rifle-wielding brethren (see below), staying behind cover and blindfiring. They inflict little damage and are easy to kill.

Armed with Combat Shotguns, these bandits walk slowly towards their foes while spraying them with pellets. It's advised to keep a safe distance and target them first since their shotguns can do a lot of damage up close. Unlike the Shrouded Heavy and Gearhead Shotgun bandits, they rarely run towards the enemy, instead opting to walk towards them, making them the least dangerous shotgun enemies in the game, much like Jackal Shotguns.

Armed with an unobtainable variant of the Settler Assault Rifle, they are a common type of Wasted clansman. They act similar to the Wasted Pistols (see above), as they will take cover and fire without aiming. When approached with caution, they inflict little damage and are easy to defeat.

Leader of the Wasted clan, the Wasted Boss is the toughest of the clansmen. He is encountered in a Monarch armed with a mounted machine gun near the end of the quest "Find the Buggy Parts", accompanied by several Wasted AR and Wasted Clubs. 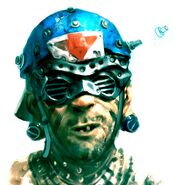 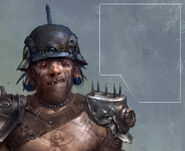 Concept of the Wasted Clan's boss by artist Ben Olson

A different version of the Club

A Shotgun, looking at his shotgun

A different version of the AR

From the "Fame and Glory" trailer

Two Wasted clansmen, from the "Fame and Glory" trailer

Locked in a Wellspring cell

Promotional image of Wasted AR in the Swamp

A Wasted Club
Community content is available under CC-BY-SA unless otherwise noted.
Advertisement