RAGE: After Apophis - The Ghosts 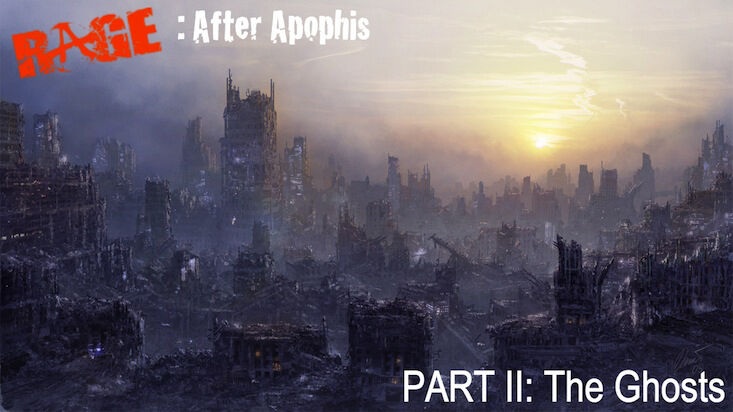 THE STORY SO FAR:

John Elway and his brother Caleb are survivors of 99942 Apophis, a meteor which struck a nearly-fatal blow on Earth. John takes shelter in the Shrouded Bunker, along with several others. Tension in the bunker is heating up. John and a couple others begin a long trek into the Wasteland, in search for food and supplies.

Cannibals. An entire pack of white savages, calling themselves "Ghosts". We could see their buggies coming down the road. Have they noticed us? I pulled out my pistol. We all made a run for a sewer hatch. We managed to get inside. The question is: is it safer in here?

Strange sounds surrounded us. We couldn't go back. Pistols ready, we began to make our way through the sewer. About a minute in, Tex called us all over. He found a storage closet, filled with food cans and ammo. I grabbed the cans, and Joel and Tex took the ammo. Looks like I drew the short straw...

Before I could trade, I noticed something out of the corner of my eye. I dropped the cans, and pulled out my pistol. Then it hit me: wheres Michael? Suddenly, we heard a scream. Was it Michaels? We sprinted down the hall to a room filled with mutilated parts. Lying on the ground was  Michael, decapitated.

Suddenly, some kind of abomination leaped onto Joel. Me and Tex opened fire. We shot the beast off, but accidentally clipped Joel in the shoulder. Before we could get a look at the beast, it dissolved. We then ran over to Joel. He was in a bad condition. Tex pulled out some bandages, and wrapped them around Joel's shoulder. We could hear screams coming from all over the sewer. Me and Tex helped Joel onto his feet, and ran for the exit.

The ground was getting slippery. Joel tripped. We could see shadows everywhere. Tex glanced back at the badly injured Joel. Then, he ran. I would've called him a coward, but I followed him. Hardest decision of my life. At least I had the sense to put Joel out of his misery. I ran after Tex. Each part of the sewer was darker than the last. I could hardly see where I was going. I yelled for Tex, but there was no response. Suddenly, I saw a ladder. Is it an exit?

I was outside. Suddently, I felt a machete at my neck. I looked up, and saw a Ghost. Behind him, Tex, bounded. I thought of running back into the sewer. I wouldn't last the night. They tied me up, and threw me in the back of their buggy.

Finally, the car stopped. We were at The Rutherford. I had been here with Dad years back. It's hardly recognizable now. We were brought inside. I hear some of them talking about a "kill room". Me and Tex are dragged into a room, with a horrid stench. We look at each other. Its now or never. I grab a Ghost, and break his nose with a rock. Me and Tex sprint to a window. A buggy is parked right outside. This is our chance...