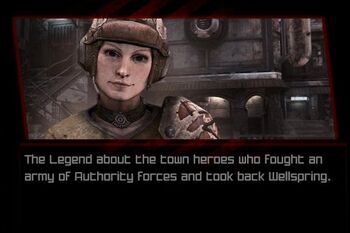 This mission offers the players one more possibility to see an "alternative version" of Wellspring, and this time it will be the Authority variant.

The starting place is the back room of "Second Chance," the local Resistance Base. The first ammunition stash is located upstairs, near the exit. There is a laser grid in the bar that blocks the entrance, and the Mobile Generator that powers it is behind the counter. Two Authority Enforcers will come through the grid as soon as the team appears in the bar, and after dispatching them it's time to destroy the Mobile Generator. Note that the generators can only be destroyed with EMP Grenades during this mission.

There will be more Authority forces outside the bar: two jetpackers will descend from a dropship above the courtyard, and two or more Shield Guards with a couple Enforcers and 3-4 Authority Mutants will appear a little later. The next ammo stash is inside the Mick's Garage, along with some Pop Rockets, HE Grenades, Sentry Turrets and other useful items. Some more Pop Rockets can be found in the makeshift market in the center of the courtyard, and there is the mission's first collectible clownface pinned to a side of a nearby bicycle cart. The second clownface can be seen pinned to the "Jackpots" sign, but it's inaccessible for now.

Next laser grid to shut down is beyond the Mayor's Office. There are a couple Enforcers a distance behind the grid, and if some Authority forces lived long enough during the previous firefight to start retreating, that's the place where to find them. The mission will be updated once the enemies are dealt with and the team advances to the destroyed generator. A Rocket Launcher along with some loot can be found nearby, and the second one is a little further.

Another dropship will appear as soon as the next generator is destroyed and the team advances to the area ahead. There will be about half a dozen Authority troops in the street, including one or two Snipers, and a couple of mutants. The next ammo stash is upstairs in the room with open window, as well as some HE Rockets in a sink, and it may be a good idea to get there and use the advantage of height, or head back and get up the stairs that lead to the Sheriff's Office and fight those enemies that will follow the players there before advancing to the promenade area.

A couple of mutants will appear from behind the fence that blocks the Speedway entrance once the team reaches the spot. The mission marker points there, and the next ammo stash can be seen inside the building to the left of the blocked entryway, but now is the best time to collect the second clownface. There is a gap between the buildings in front of the Speedway entrance, and the Mobile Generator that powers the laser grid near the Job Board is right behind the makeshift wall. An EMP Grenade will find a way to the generator, and when the laser grid is down, it will be possible to pick up the clownface. There is some loot inside the "Outfitters" that can be collected on the way back.

An Authority Elite will appear once the players follow the mission marker to the building near the Speedway entrance and power down the laser grid ahead. A dropship will land a few Enforcers in the Speedway, and a Shield Guard will join them a little later. When they're dealt with, it's time to collect the last clownface from some shelves near a bunch of tires and shut down the comm relay to complete the mission. 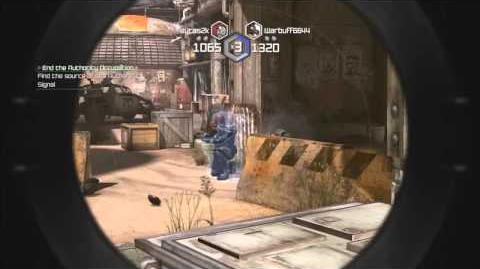