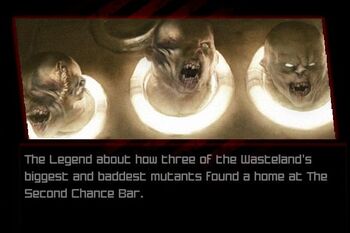 The mission takes place in the Blue Line Station. Note that the ATMs and vending machines are not lootable during the co-op missions.

The team starts the mission inside the Blue Line Station. There is an ammunition stash nearby and three Advanced Wingsticks that may come in handy later on.

There will be about five Club Mutants when the players exit the first train, and a few more will appear as the players reach the next area. Later on, the mutants will just come appearing in packs in different locations, and often the team will meet mutants in the areas they've cleared previously.

The second ammo stash is found up the stairs and to the left, in the area near the bathroom where the demolition charges were found during the quest "Mutant Expansion". There is useful loot nearby, including the mission's first clownface collectible. Mutants will attack from the area down the stairs, and will use the stairs and simply climb up to get to the team.

The third ammo stash is located in the area after wrecked restroom. The second clownface collectible is to the right and all the way to the corner. After the players reach the station foyer, a Large Mutant wielding his huge makeshift cannon will appear in front of the team's entrance point, along with some grunts that will come from the wall to the right. The Large Mutant, which is invincible for now, will make a few shots and leave, and then two Krakens along with about two dozens grunts will appear from the opposite direction. The players will have to move constantly to avoid the Krakens' attacks and kill the grunts that will try to rush them all the time. After all the mutants are dealt with, it will be possible to pick up the third clownface collectible from the counter near two vending machines to the right of the Krakens' entrance point, which is also the only way out of the foyer and to the fourth ammo stash that can be found on a flattened car ahead.

After the players head all the way down along the wrecked train, they will have to fight about ten mutants to get to some bandages and ammo ahead, including Pop Rockets and HE Rockets. The Rocket Launchers can be found in the area past the corridor with the last ammo stash and more raging mutants.

It's best to keep the rockets for the Large Mutant and fight the grunts in the area in more common ways. As the players do it, the final "trophy" will appear up on the stairs. Grunts will keep arriving from different directions, along with Dyno-Mutants, and so the areas where the cannon's discharge won't reach the players can hardly be called safe. There are two ways of fighting the Large Mutant. The fast one is to do it the way the Krakens were fought, shooting off the grunts and dealing some damage to the "trophy" whenever possible. The other way is to dispatch about two dozens grunts until they decide to take a break, or even stop appearing at all, and then the players will be able to focus on the Large Mutant entirely and take the monster down with just a few rockets. Either way, the mission will be over after the final "trophy" is defeated. 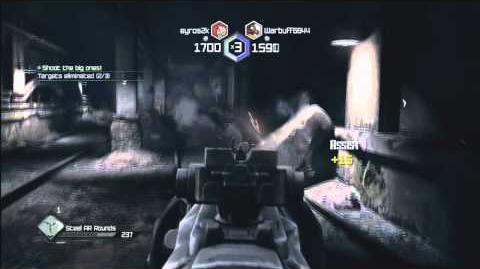