"The Exchange" is a Job Board quest in RAGE acquired by the protagonist from the Job Board in Wellspring. It is available after completing the quest "Liberate Captain Marshall".

Sheriff Black is making an exchange with the Authority!

We need Sniper Cover to ensure the Sheriff makes it back alive. With the Authority, it's a sure thing something is going to happen. If you accept, the job begins immediately.

As with the other sniper quests, you're in a nest with more or less unlimited ammo, as well as an upgraded Sniper Rifle. Note that there are a lot of windows in this nest which will come in handy some time later on. Down below, there is an Authority Predator, a Dune Buster, and two men on each side. Don't pay attention to the mutant sounds you hear, there will be no muties this time. It is advised to discover the Authority Snipers present right away and keep a eye on them. One is above a big sewer pipe across the valley, and the other is on a ramp to the right.

The exchange will take place, then go bad. The Snipers will turn on their laser sights, which means it's time to engage them. The Predator will blow up soon, but ignore the explosion and keep firing at the Snipers. After you're done with them, an Authority Dropship will appear. Try and shoot the jetpackers, since it's an easy way to deal with them, and then start looking for a few more Authority Snipers to the right. One will be near a building far away, the other one on a ramp fragment. Another dropship will appear, so shoot the jetpacker that is about to be dropped on a ramp near to where one of the Snipers was.

There will be a few more Authority on the ground, near the ramp to the right of the former Predator's position, so deal with them as well, and you're all done. 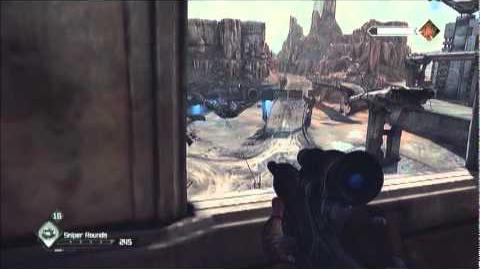 A Sniper across the valley

A Sniper on a ramp

A Sniper right of the ramp

A Sniper left of the ramp