Subway Town is a location featured in RAGE. It is the biggest settlement in the Eastern Wasteland, and the only one that is not hostile towards Nicholas Raine. This center of civilization has the best selection of goods available, offers the hardest racing challenges, and houses many interesting characters.

Far from the warmer, more open atmosphere of Wellspring, Subway Town dominates the landscape of the Eastern Wasteland. It can be said that Subway Town is, in fact, the antithesis of Wellspring — rather than appearing open and looking back to the days of the American West, Subway Town is, in every sense, modern, with the cold porcelain, neon lights, and trance-like music of the former subway system being perhaps the most vivid feature of it.

Built under the ruins of Crescent City, the town itself is perhaps only two third the size of its Wellspring counterpart, as space limitations are all too apparent and expansion is extremely difficult in comparison. Despite this, the city boasts a bar, two separate garages, a racing system, and a flourishing economy comprised mainly of "Jani's Supplies" and Stew.

Redstone, the permanent Mayor of the settlement, runs the town as he sees fit — coldly and remorselessly. Indeed, the citizens of Subway Town show distaste and often fear for Redstone and his hired guns, but openly state that they prefer his dominion to the Authority residing in nearby Capital Prime — Redstone may seem to be a tyrant, but the town has its complications.

Built on three separate floors, the structure is laid out as follows:

Below Saul's Garage is the Resistance Base, where the protagonist will enter first after arriving from Wellspring via a Zeppelin.

Concept of the ticket seller by artist Ben Olson 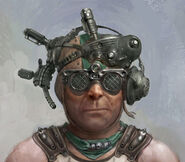