The Desert Striker Crossbow  is a silent weapon featured in RAGE. The crossbow is a quest reward given to the protagonist by Dan Hagar in Hagar Settlement after completing the quest "Resupply Dan Hagar".

The Striker Crossbow is a medium distance sniper weapon (without a sight, though) that makes no sound. Unlike most crossbows, the "bow" part is constructed backwards and it uses a magazine system to store bolts. Although not said in-game, it can be clearly seen that the crossbow is loaded by a small machine of some sort which pulls back the bow; this would also explain why the crossbow is semi-automatic.

If the player looks closely they can see that the crossbow has a letter and numbers on it that spell "M2625-3". 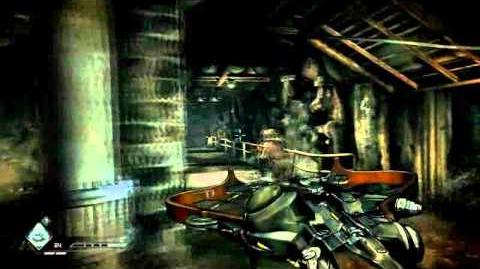 Crossbow hanging on the wall

An Elite with an arrow in the head