Stew is a character featured in RAGE. He is a vendor and a resident of Subway Town. Stew can be found on the top floor of Subway Town behind the "Jani's Supplies" store, where he sells a random item for slightly less than the regular store prices. In RAGE: The Scorchers, he is found at the beginning of the Scorcher Base acting as a normal vendor. How he got there without being killed by Mutants or Scorchers is unknown.

While there is no actual way to predict which particular item he is selling at one time, it is highly recommended that the player checks back often, as nearly all items are below the prices of the nearby "Jani's Supplies". Occasionally, he will sell an item for less than the player can sell it to Jani (e.g. Viper Rockets, which he will sell for $66 while Jani will buy them for $75, HE Grenades which he sells in stacks of 5 for $14 and can be sold for $4 a piece, netting a $6 profit on every stack, Authority MG Rounds, which he will sell for $20, while she will buy them for $26, and bandages, which he sells for $11 and she buys for $12, and since both he and Jani will sell and buy infinite amounts, the player can use this to easily make the maximum amount of money, being $9999.

In all his glory 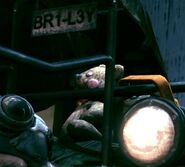 Free teddy bear with every purchase!..

At the Scorcher Base
Community content is available under CC-BY-SA unless otherwise noted.
Advertisement