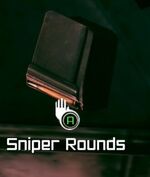 Sniper Rounds are a type of ammunition featured in RAGE. It is the only ammunition type used with the Sniper Rifle. It can be bought from vendors and also found in a few locations in the Wasteland.

Despite the fact that the Sniper Rifle is obtained early in the game, it is not provided with additional types of ammunition like the other weapons. Still, the weapon is powerful enough and the Sniper Rounds serve well to Nicholas Raine till the very late stages of the game, when getting one shot kills is nearly impossible.