Auto-loader
The Sniper Rifle is a high caliber scoped weapon featured in RAGE. It has the highest range and accuracy of all the weapons and can be obtained from Dan Hagar during the quest "Destroy the Barricade". It will usually kill an enemy in one headshot, unless the target is wearing a helmet.

When you first acquire it, the weapon appears to be a bolt-action rifle. Despite it only having one ammunition type, it boasts high range and deals a significant amount of damage in a single shot. It is by no means a stealthy weapon, making an extremely loud sound when fired and alerting nearby enemies. The scope has two magnification settings, toggled with the "Use/Interact" button, and also includes an ammo counter and reloading indicator. 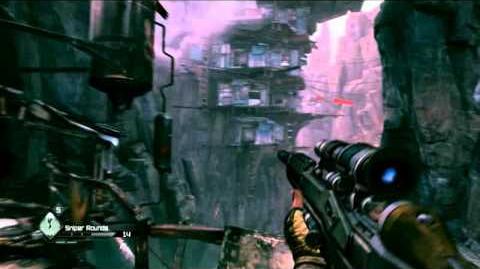 The only rifle mod available is the Auto-loader, which makes the rifle semi-automatic. It can be obtained automatically by starting the mission "Mutant Menace" acquired from the Wellspring Job Board.

In Dead City
Community content is available under CC-BY-SA unless otherwise noted.
Advertisement