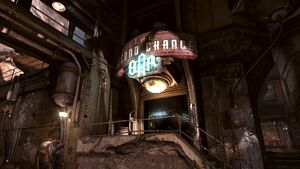 "Second Chance" is a location featured in RAGE. It is a bar in Wellspring. It can be easily found by turning left upon entering the town, and walking straight ahead. It is up a small set of stairs, and there is a big sign bearing the bar's name over the entrance so it is hard to miss.

The bar is guarded by Spector. Sally LePrine is found in there, standing at the bar. Hendrik is also inside at his card table, and can sell Nicholas Raine the Starter Deck of Collector Cards and play minigame Rage Frenzy with him.

Abbott, Elizabeth Cadence and Richard (along with a host of lesser characters) are also found here.

The bar happens to be an important part of the story, and the player will enter this location quite frequently during the beginning. Following the "Secret Delivery" quest, the back of the bar will be made available, allowing you to meet members of the Resistance. It is also featured in the Wasteland Legends co-op missions "Water Service" and "Unwanted Guests".

Sally at the bar

Jacob and Pollard having a drink

Hendrick, at his card table

The back of the bar

The Resistance hideout
Community content is available under CC-BY-SA unless otherwise noted.
Advertisement