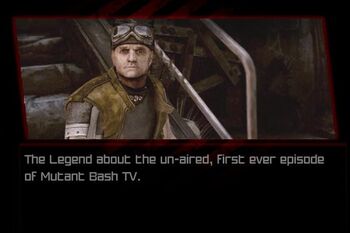 J.K. Stiles was still in the process of setting up the Mutant Bash TV arenas when the first contestants arrived to participate. Not wanting to turn down these two, he allowed them in, unprepared. At the end of this Legend, it is said that J.K. never put the recording on air as there were too many malfunctions (the lift, the spikes, etc.) but still it was one heck of a mutant killing show.

The players start at the usual Mutant Bash starting location. The mutant mannequin at the corridor's turn hides two Club Mutants behind it, and there's the mission's first collectible clownface in the wall down and to the left of it.

The first arena will bring a few dozens of Club Mutants and a couple of Scoop Mutants, and the Combat Shotgun and Wingsticks will come in handy right away. First, the mutants start appearing from the corners opposite the entrance, and when the decorated tubes will come from above, the corners near the entrance will be used. When those all mutants are dealt with, platforms will rise from the floor, bringing Scoop Mutants and opening manholes beneath the platforms for Clubs. When the third wave starts, more Scoop Mutants appear on the platforms and more Clubs will come from the manholes. After the first challenge is over, the exit will be open to let the players into the service area where they can resupply. The first ammunition stash will be there, as well as a few Fatboys and Wingsticks on the shelves.

When the players step on the platform that is supposed to take them to the upper level arena, the mechanism experiences failures. First, it will bring the team up so the mutants will be released and the bladed revolving gorilla figure will start moving, but right after this the platform will fall and the mutants that pass the bladed figure will attack the players from above. After this rather small wave of Club Mutants is dealt with, the platform will slowly rise a little and then jump high to the ceiling. About a dozen Club Mutants will appear from the holes in the walls, jump to the floor where the gorilla figure keeps spinning and climb up to the platform. When they're all dealt with, the platform will come down to the floor level. When the safety rails come down, about a dozen more Club Mutants will appear from the holes in the walls, as well as a few Dyno-Mutants. When the mutants are finally dealt with, the door will open, and it will be possible to pick up the second collectible clownface from the floor behind the left of three "trees" to the left of the exit. The second ammo stash will be on the shelves in the corridor behind it, as well as a few Wingsticks, HE Grenades and some Fatboys and Bandages.

The next arena's giant "one-armed mutant" will malfunction right after the start of this part of the show. The target won't move below the wheels, and the wheels will keep spinning and landing on skulls, thus bringing the mutants in. The first wave will consist of about half a dozen Club Mutants and one or two Dyno-Mutants, as well as the second wave, and during the third wave the hatches on the sides of the "one-armed mutant" will keep opening and closing, letting through more than a dozen of Club Mutants and a few more Dyno-Mutants. When all the mutants are dealt with, the door will open letting the players to the corridor with the last ammo stash and some Wingsticks and Fatboys on the shelves. There is an arrow that points to the nearby "Shipwreck Cove" arena, and the third collectible clownface is right above this arrow.

The last arena's spikes and red "targeting" lights will also malfunction, and the spikes will come out from the floor in the targeted quadrants immediately after the lights turn red. First, the Club Mutants will start coming from some of the manholes in the corners. There will be less than a dozen of them, and some are to meet the spikes. Then more of them will come, along with a Dyno-Mutant. When they are dealt with, the lights and spikes will be disabled and a Kraken will appear, and that's when the Fatboys and HE Grenades may come in handy. After the Kraken, along with the Club and Dyno-Mutants that will also appear, are all defeated, the mission will be over. 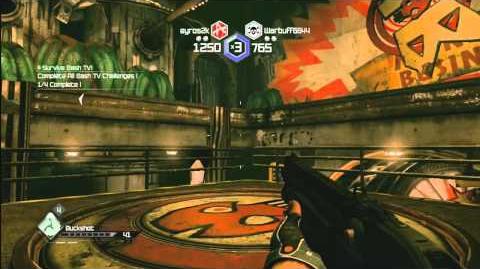