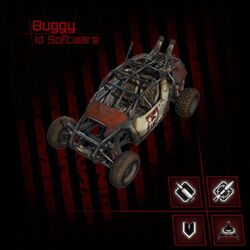 The Scout is the first of five different vehicle types featured in the multiplayer mode Road Rage in RAGE. Automatically given to the player at level 1, it uses the id Software theme by default.

When the player reaches level 2 and the next levels, other variants of Dune Buster variants will be unlocked to replace the id Software theme, each featuring a new one:

When using this vehicle, it's recommended to take advantage of fights between two or more players when the enemy vehicles are severely damaged for quick and easy killing. In Rally modes, the player should try to keep the enemy attention away from themselves while scoring points through the objectives. The player should stop using this vehicle as soon as the Enforcer, as it has much greater armor and speed. This vehicle is best used on the Southern Highway map.