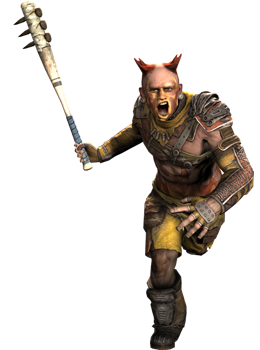 The Scorchers are one of the bandit clans in RAGE and RAGE: The Scorchers. Not much is known about them, however they decorate their bodies and vehicles with images of fire and destruction, which makes it easier to spot them in the wastes. They control the area around the Dead City through motor dominance, and have taken control of many abandoned locations throughout the Wasteland, such as the Hagar Caves.

The Scorchers worship 99942 Apophis, the asteroid that destroyed the old world as shown in the Prologue. They believe a demigod rode the burning rock straight into the soul of the planet, and that by tapping into its energy, they will become the "toughest motherfuckers" in the Wasteland.

These bandits are led by the Reaver, supposedly found on Firestorm, a nasty clansman known for his brutality and his hatred of the Shrouded Clan. He likes to scorch everything in his path and is easy to recognize out in the Wasteland because of his vehicle's custom paint job. The Vehicle Combat with the Scorcher patrols are usually very challenging because they are encountered in groups of three or more whereas other bandit vehicle encounters are usually fought one at a time.

Melee-oriented Scorchers carry either a metal club or a flaming bat, and have a distinct character model that is noticeably different from the other Scorcher types. They behave similar to melee-based Wasted or Gearheads, and charge the player to hit them with their weapon.

Scorchers equipped with pistols behave similar to the Shrouded Clan pistol clansmen, taking cover and attempting to provide support with a rather weak unobtainable pistol variant.

Relatively uncommon, Scorchers armed with shotguns are usually found attempting to ambush the player by bursting through doors or charging into an area.

Scorchers equipped with Assault rifles are the most common type of Scorcher encountered in the DLC missions. They are roughly on par with the Shrouded Clan in terms of fighting ability.

Many assault rifle-wielding Scorchers are equipped with jetpacks, which they use to make rocket-assisted jumps from one area to another. They can stay airborne for a couple seconds, but cannot float for a long period of time. They only use their jetpacks periodically, preferring instead to fire from cover like most other firearm-wielding enemies. If you manage to shoot them before they land on the ground, much like Authority Enforcers during descent, this will result in instant kill.

These clansmen are large and heavily armed equipped with a flamethrower, similar to the Gearhead Jet. Unlike the Gearhead version, the Scorcher Jet's flamethrower is of sturdier construction, and the fuel tanks are armored so only high-powered ammunition will detonate them.

Concept of the Scorcher varieties by artist Ben Olson 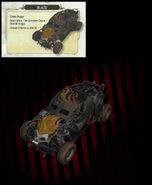 A Scorcher buggy
Community content is available under CC-BY-SA unless otherwise noted.
Advertisement