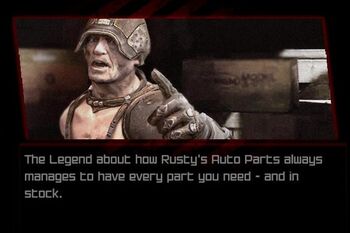 The players are to walk through the Wasted Garage gathering 25 different Auto Parts in the course of 12 minutes. The players are not required to gather all of the parts, but the final score will be penalized for missing them.

There are no collectible clownfaces available in this mission, but you still need to find the 25 Auto Parts.

The starting place is near the garage entrance that is located in the Wasted Territory, not far from the Outrigger Settlement, and so the team will have to descend a few times during the mission until they reach the getaway truck near the garage exit in the Ark Emergence area.

The players have all the time they need to check their (rather poor) starting equipment and use the first ammunition stash to resupply. The countdown will start only after they leave the room and advance towards some Small Gears ahead that count as an Auto Part. There are no Wasted in the area, so the team can gather all five Auto Parts in the area in just a few seconds. There is also a Lock Grinder needed to open the locked door that leads to the next area.

There is a nightstand down the stairs with Small Gears in the drawer, and about fifteen Wasted of different types. They will utilize any cover available, and even the Clubs seem to be a little more cautious. The ammo stash at the end of the level will provide Combat Shotguns to the team that will come in quite handy later on. The area is rather linear for the messy place the Wasted Garage is, so there will be no need to spend more time on this level than finding all the five Auto Parts may take. Another Lock Grinder available will open the stairs down to the next area.

This area is messy and contains a lot of enemies, and so it may be easy to lost tracks and miss some Auto Parts. There will be a hole in the wall to the left after the team enters the area, and while one player uses it and the nearby doorway to shoot some Wasted behind the wall, the other should head up the stairs to the right and pick up a Lock Grinder that will be necessary soon, along with some useful loot and an Auto Part a little further. There will be more Wasted in the area soon which is going to make finding the other four Auto Parts more difficult, and a locked room and an ammo stash along with some Sentry Turrets, HE Grenades, Dynamite Bolts and other useful items. (Note that the Sentry Turrets and best ammo should better be kept until the last level.) Once all the five Auto Parts are found, it's time to head down the stairs to the lower level.

There is an Alternator in the box below the stairs, and two Wasted nearby. About a dozen more will appear while the team seeks four more Auto Parts. The ammo stash at this level contains two Striker Crossbows which will make the walkthrough a little more vivid, and more Dynamite Bolts can be found throughout the area, as well as some Sentry Turrets and other useful items. The hole in the wall of a wrecked restroom will take the team to the ground level of the garage where the getaway truck is found.

There will be a few Wasted down the stairs, and more of them around the corner. The cars present in the area don't contain any Auto Parts Rusty needs, so the players should seek those in other places. As the team closes to the end of the level, more and more Wasted will be coming from an inaccessible area not far from the exit, and after some clan members blow another way in, there will be even more of them, coming from all directions. That is the right time for the Sentry Turrets and any heavy ammo the team may still have. After the last five Auto Parts are found and it's safe to open the garage door and reach the getaway truck, the mission will be over. 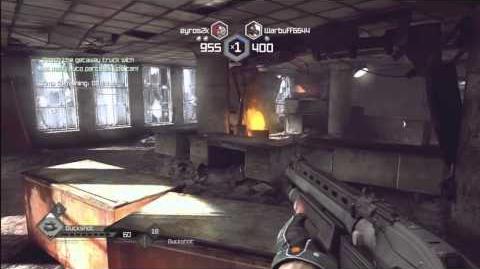