RAGE Wiki
Register
Don't have an account?
Sign In
Advertisement
in: Characters in RAGE, Residents of Outrigger Settlement, Residents of Subway Town

Rourke is a minor character featured in RAGE.

Nothing is known of Rourke's early life. He appears to work as a mercenary, offering his services as a hired gun to local communities.

In 2135, after Nicholas Raine is rescued from the Ghosts by Dan Hagar, he is instructed to seek out Janus Outrigger in the hopes that they can provide the necessary parts to repair a Dune Buster for Raine. Rourke is a guard protecting the small community of the Outrigger Settlement; he provides directions and tells him to stay safe.

Later on, the Outriggers decide to abandon the settlement due to rising mutant threat. They are not seen or heard from again, though Nicholas encounters Rourke at the Fez bar in Subway Town. When the Authority occupies the settlement, he can be found hiding in the upper levels and openly states his disdain for the Authority. He complains to Raine that too few people are willing to stand up to them and vows to fight them when he gets the chance. 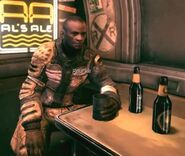 Rourke in the Fez bar in Subway Town.