Rescoe is a character featured in RAGE. He is one of the guards hired to protect the Wellmasters in the town of Wellspring.

He is only encountered during the quest "Hijacked Well", during which members of the Ghost Clan assault the Wellmasters and attempt to poison the town's water supply with a deadly toxin. He is among a team of guards led by Valder who joins Nicholas Raine in fighting off the bandits, though he can be killed in the fighting. 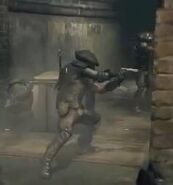 Rescoe fighting off the Ghost Clan
Add a photo to this gallery
Retrieved from "https://rage.fandom.com/wiki/Rescoe?oldid=41221"
Community content is available under CC-BY-SA unless otherwise noted.