Rage Frenzy is a turn-based card minigame featured in RAGE. It is first introduced by Hendrik at his card table in "Second Chance" in Wellspring, and later by Teague in "Fez" in Subway Town.

To play the game, Nicholas Raine must have his own deck of cards. Most of the 54 Collector Cards are found in different locations throughout the Wasteland, and some are the quest rewards. Also there is the Starter Deck that consists of five cards and can be bought either from major vendors (Coffer and Jani) or at one of the card tables run by Hendrik and Teague for $50.

Rage Frenzy is a turn-based card game. The idea is to build a deck with cards that the player collects throughout the game. Each card shark offers three difficulty levels, at increasingly larger play costs. The difficulty level chosen determines the points available to be used for building a deck.

Each card has a cost associated with it, and the maximum number of cards in a deck is 12. So, it's advised to spend points wisely and avoid too many points remaining and too few cards.

The game starts with both the player and the opponent flipping the top card from their decks. All cards enter play in a guarded state reducing incoming damage by 50 percent rounded down. Once a card performs an action that card is no longer guarded, and it receives full damage from any incoming attacks, unless the chosen action was to re-enter the guarded state.

There are several different types of cards. Melee cards only attack cards directly across from themselves. Healing cards may choose to heal a damaged card or enter the guarded state. Ranged cards may select their target, however if the opponent has a vehicle card in play, the vehicle must be targeted first. Vehicle cards generally have higher hit points and can only guard, making them great defensive cards. Finally there are Bomb cards that damage all cards in the opponent's play area when they enter play. Bomb cards do not stay in play, but are instead discarded after taking effect.

The turn consists of performing each of the cards' actions from left to right. If at the end of the turn the player has fewer than four cards in play, they must flip the top card from their deck and place it into play. If the flipped card is an explosive, the card performs its action and is discarded. Otherwise, it is the opponent's turn. The discarded cards are removed at the beginning of the turn, and all cards move to the left to fill in any open spots left by the removed cards. The player wins by destroying all of the opponent's cards. Winning awards them the initial wager, and losing costs them the same amount. In the event of a tie no money is lost or gained. 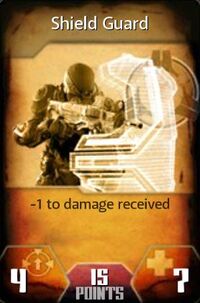 The points that are shown on the middle bottom of the card (see example card) indicate the card's deck-construction cost. Upon building a deck the player only has limited points available, so the player is limited in choosing the best available cards to play in the card game. Choosing a higher value card will limit the amount of cards the player can play in the round, but still, the card is stronger.

All cards except Bomb cards have a level of health which is shown on the right bottom of the card. Health is drained by the attack of the opposing cards. When the health of a card reaches zero the card will be removed from the table.

Some Melee and Ranged cards may have extra properties, like receiving less damage, increasing damage and health of other cards and stunning an opponent card. This extra buff is listed in the center mid of the card. The example on the right shows damage it receives is reduced by 1.

Vehicle cards all have the same buff: opponent's Ranged cards must target and defeat this unit first to be able to target other cards. Since Vehicle cards never attack, they always enter guarded state every turn, enhancing their defensive capabilities.

Some Bomb cards can only attack a specific faction or card type, which is named in the center of the card.