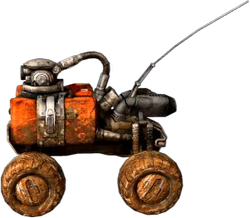 The RC Bomb Car, also referred to as RC-XD (Remote Controlled EXplosive Device), is a quick-use item featured in RAGE. This small radio-controlled car loaded with explosives is a type of weapon and an engineering item.

Nicholas Raine, as well as other people using them, can drive a bomb car through ventilation shafts or behind cover and then detonate the car. The farther the car gets from the user, the weaker the signal gets. This could make the car less responsive to the controls, or potentially cause it to detonate. These items are destroyable by hostile NPCs if they are aware of them being used.

This upgraded RC Bomb Car has a larger explosion radius as well as added EMP damage. Additionally, it has a Boost option that allows it to move more quickly, much like larger vehicles. These features make the Advanced RC Bomb Cars more useful against the Authority and other enemies that would destroy a standard bomb car en route.

Memmott toying with his RC car

Inside the Trophy Room
Community content is available under CC-BY-SA unless otherwise noted.
Advertisement