Rage 2 (stylized as RAGE 2) is a post-apocalyptic open world first-person shooter developed by Avalanche Studios with (creative) oversight of Id Software. It was announced by Bethesda Softworks on May 14, 2018 as a sequel to the sci-fi first-person shooter racing game RAGE, released in October 2011.

RAGE 2 is available on PC, PlayStation 4 and Xbox One and released on May 14, 2019. On June 6th, 2019, Google announced RAGE 2 is available via the cloud Gaming through Stadia. It was announced on May 15, 2018 that the game's pre-order bonuses include a unique mission called "Cult of the Death God", the "Settlers Pistol" from the original RAGE, the Nicholas Raine Armor, and a Monster Truck skin for use within the game.

The game is set in 2065, thirty years after the events of the first game. Humanity has found a way to heal the world, turning regions of the Wasteland into lush jungles, wetlands and even tundra.[1] Trade is growing and a type of "Wild West" society is emerging.[2] The brutal ways of the old world still remain, however, and these new, delicate biomes are under attack by gangs that want to control their resources. The Authority has returned, waging war against anyone who won't follow their rule.[1]

The player assumes the role of Walker, one of the last Rangers in the Wasteland. After being robbed of his home and both his family and adoptive mother and mentor by the Authority, (the primary antagonists of the first game), Walker tears through the Wasteland to seek vengeance and to ultimately end the Authority's oppression.

Some characters from the original RAGE also return, such as Antonin Kvasir, Loosum Hagar and John Marshall.[3]

* Note: There is an after-credit scene.

Walker's home gets stormed by the Authority who have returned from obscurity after their defeat by John Marshall and the Resistance of the first game alongside the newly emerged "Arkists". The Authority attack en masse with their mutants, crushing the defenders of Vineland. All seems lost when a huge and unknown variant of mutant brings down the wall of the city and begins tearing its way through the defenders, however the famed Ranger Jersey arrives and promptly slams his motorbike into the beast before utilising his nanotrite abilities to get the upper hand in the combat. However before he can leap free of the Mutant, Jersey is clenched in the beasts fist, manages to throw a grenade into his opponents mouth and blowing the creatures head clean apart, unfortunately not before his own head was torn off in the mouth of his foe. Walker then takes Jerseys' armour and takes on the role of Ranger of Vineland himself.

Continuing to aid in the defense, Walker finally links up with Ranger Prowley, his "aunt" and mentor, who is rallying the remnants of the cities defenders against the Authorities relentless onslaught. As the combat rages on, through a breach in the wall it is revealed General Cross has survived the events of the first game and the Authority wars, albeit heavily augmented to the point where it appears his head is the only part of his body that is still organic.The General seems to remember Prowley, and along with the other first generation ark survivors, has her kidnapped for experimentation (likely to continue with mutant and nanotrite experiments first explored in the first game).

With the battle over and only twenty survivors of the city left alive, including walker and his close friend Lily, the two come up with the idea to have Walker enter Vineland's Ark and see if he can piece together any reason for why the Authority might have sought them out. Discovering a hologram of Prowley, Walker discovers he is the last living member of the Rangers of Vineland and is now tasked with bringing together the members of a group who can initiate Project Dagger, a plan designed to wipe out the Authority and General Cross once and for all. Regrouping with Lily at Vineland's ruined entrance, the two come up with a plan to return Loosum Hagar, John Marshall and Anton Kvasir back into the fold of the project and gain vengeance for the loss of their home.

The adventure takes Walker to both familiar and unfamiliar locations and to a landscape wholly changed since the original Rage.

Wellspring returns and locales such as Oasis and Gunbarrel which are mentioned in the original game are introduced for the first time as playable locations.

Many elements return from the first RAGE, including Vehicle Combat, Wingsticks and Mutants. Many of these elements have evolved between games; the Wingstick now has an enhanced tracking ability, and vehicles can be repaired and customized to a greater extent.

The Wasteland is a big place. You can take an airboat ride across the swamplands, explore a city that's been overtaken by vegetation, head into the deadly chasm known as “The Crack,” and even venture through mutant-infested sewers and high-tech Authority labs. Despite the vastness of the game world, RAGE 2 is completely free of load screens.

Prior to the announcement of the official game by Bethesda, there were many words that there may or may not be a sequel from information from many different sources.

In an interview with IGN, co-founder John Carmack stated that he plans to do a sequel to RAGE after Doom (2016) ships. "We're about to roll the whole core tech team over to Doom", Carmack said, when asked what lessons the studio learned from developing RAGE. "After Rage certifies, the heavily-lifting code team will be migrating over to do new systems [for the Doom team]."

"Building up the new team has been challenging to bring that many new people in and bring them up to speed," he added. "We're going to migrate more of the RAGE 2 team people, and then we're going to roll onto RAGE 2."[4]

In 2013, ZeniMax Media cancelled any and all projects related to RAGE 2 in order to "speed up progress on Doom (2016)." This could mean that we may not be seeing RAGE 2 for quite some time.

However, on August 4th, 2013, RAGE co-founder Tim Willits mentioned RAGE 2 is "Not Dead", explaining that "We're not doing anything immediately with it, but when I designed the universe, I designed it in such a way that it would be easy to step back into. I'm still proud that we did something that was different – it wasn't like the games that we've done in the past".

In an interview published on August 9th, 2016, vice president of Bethesda Softworks Pete Hines commented on the possibility of a sequel to both RAGE and The Evil Within. When asked about a potential RAGE 2, Hines said, "I do think both The Evil Within and Rage did well enough that we could make sequels". However, Hines also stated that the studio has a lot of games in their pipeline, so whether or not we'll be seeing RAGE 2 come to fruition is yet to be seen.

RAGE 2 was pitched to Avalanche Studios by id Software. Avalanche had a free team available, and the two companies began working together. Avalanche is handling the majority of development, while Id provides combat, story, and art support. From the outset, Avalanche wanted to inject color into the game, to distinguish it from the "super brown" games that both studios had previously put out. An inspiration for the game came from 80s and 90s comic books. At the time, in Europe, a lot of post-apocalyptic comics in this period had a heavy use of color, which provided inspiration for the game's art design.[3]

On May 14th, 2018, a teaser trailer for RAGE 2 was leaked, followed by a longer, 1-minute clip of a live-action announcement trailer with some CGI, and a gameplay reveal planned for the following day, thus confirming the sequel’s existence. On the same day, the German site of RAGE 2 ended up confirming the developers, which were unknown before, being Avalanche Studios as the lead developer, with id Software having (creative) oversight over a large part of the development. The story was revealed in the description of the gameplay trailer.

There will not be multiplayer in the traditional sense, but the game will have a "social component." The game will not have loot boxes. 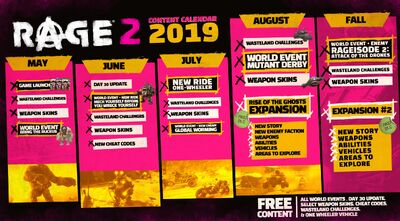 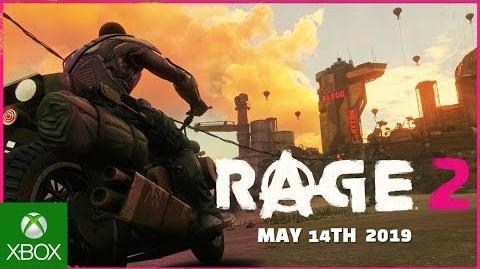 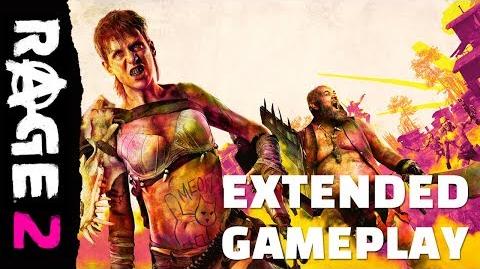 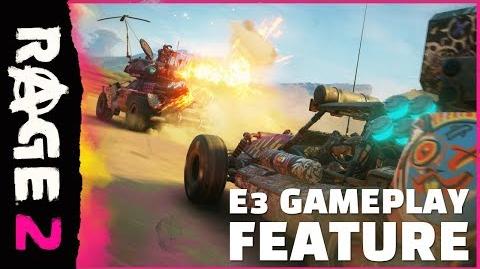 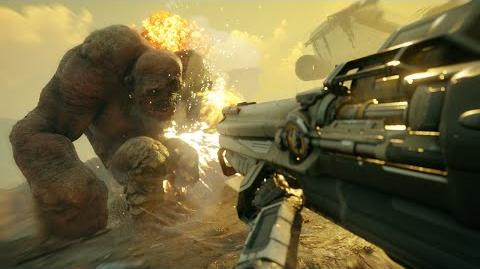 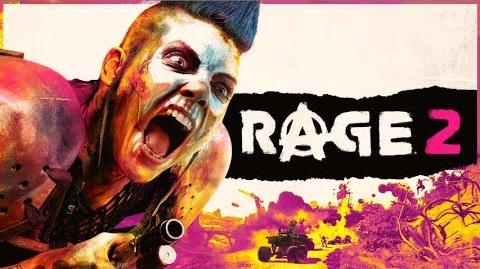 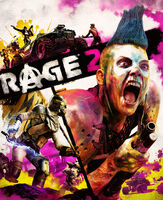 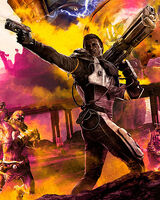