"Medical Supplies"
"Quell the Bandit Threat" is a quest in RAGE given to the protagonist by Dan Hagar in the Hagar Settlement. It is the first main mission in the game after the Prologue.

Talk is cheap in this world, action is needed.

First take the Pistol and Supplies from the counter. Then grab one of my ATVs, and head up North to the Ghost Hideout. Don't come back until they're completely wiped out.

You do this for me, and I'll give you some old Ark Armor to fit that Ark Suit you're wearing.

After Dan Hagar rescues Nicholas Raine from the two Ghost Clan members and explains a bit about the Wasteland; he takes the protagonist to his headquarters, Ray's Oasis in the nearby Hagar Settlement. The residents of the settlement are good, hardworking people that happen to have gang trouble of their own, and Dan Hagar fears that saving Raine means starting a war with the Ghost Clan. Before the clan figures out that their two guys were killed, the protagonist has to go to their hideout and kill all the members in that area. The protagonist is given $50, a Settler Pistol with a dash of ammo, bandages, and a Jetter ATV.

After accepting the quest, don't go for the ATV right away. There are three easily obtainable Collector Cards to be found in the Hagar Settlement that are needed for the Achievement/Trophy "Gotta Have 'em All". First being the Dan Hagar card found at the other end of the room — grab it and go outside through the garage. For the second card, continue walking to your right, around the headquarters building, to pick up the Loosum Hagar card on some rocks. Stop to speak with Becky and pick up the third one, the HE Grenade card, found on the barrel next to her. Now that the Collector Cards are out of the way, turn around and walk up the stairs to speak with Loosum Hagar and complete the short side quest "Wingstick Mastery", which will award the protagonist with five Wingsticks — considered by many to be the signature weapon of the game, and when used properly, it can be an extremely useful tool when dealing with an onslaught of unarmored enemies.

Also consider visiting Halek's general store to pick up the Monocular weapon mod which will give your pistol[1] a zooming function, and then you are 100% ready.

Take the ATV and leave to the old Rutherford hotel. When you arrive, leave the ATV and use the unique chance to look at an "inactive" enemy vehicle that stands near a Stanley Express Mailbox. There is a parking meter located just past the Stanley Express Mailbox and to the right of the Comet Bloom plant. Pressing 'E' will sometimes net you cash. The meter re-fills with cash throughout the game, so visit it often. Pick up the Comet Bloom flower (if present) on your way to the bridge, run across it and enter. Loot the body immediately in front of you and take the loot to the left in the wooden box. Turn back right, duck, and grab the Beer Bottles and an Aerosol spray. Jump the barricade, snatch the Pistol Rounds and Bandages, and the Radio to the right. Ignore the locked door for now. You need a Lock Grinder, and you don't know how to make them yet. This lock can wait till the mission "Missing Person," as well as the Ghost Pistol card behind the door.

You'll meet your first bad guy just ahead. Shoot him quickly, and grab the junk over by the pillar and the Cloth Rags against the back wall. Grab a book and a Doom mug on the counter and proceed down the corridor where a Bonestick will rush you. There's an Electrical Wire Kit in the cardboard box on the left, and moving forward, slightly above eye level between two torches, there is also the Ghost Bonestick card. Grab the Beer Bottle to the left of the statue as you exit the hallway, then head around the back of the statue to snatch the Ghost Boss card under a small table.

At the end of the next corridor is a quick way back to the right, and two more Bonesticks (exact number varies depending on difficulty) who will rush you on the way towards the large statue to the left, where a rare mid-level cutscene will occur. The protagonist will come back to senses in the fondly named "Kill room", where you'll learn to use the Defibrillator implant, and this is when the level properly commences.

Save often as the tip suggests. Saving after a tip to save is a good plan.

As the tip says, you can crouch to sneak up on enemies, so do that, snatch the Pistol Rounds behind the door, and take out the Bonestick you'll see soon in the back of the head. The noise will alert the other Ghosts, so reload quickly, and get ready for a firefight.

You'll encounter one Ghost Pistol behind a sofa, and a Bonestick will rush you soon after. There are two more Pistols lurking around, so take them down, and grab the Pistol Rounds off the both tables. (Note that you can actually shoot the Ghosts on the aircraft seen far in the air when you exit the bedroom, and they will fall down, but this won't net you anything.) There's also the Wolfenstein room Easter egg here which is both curious and potentially gets you $150 early in the game, and so is worth checking out.

Head around the corner where a Bonestick will drop from the ceiling and charge you. There are two Pistols in this room, and another Bonestick will emerge from further back. Grab the Pistol Rounds and don't miss the Bandages to your left in the bathroom area. Once you've had a look around, head through the doorway.

In this area, prepare yourself as you see a Bonestick ziplining across towards you. As you continue, one more will arrive on another zipline. Take him down, and continue. When you get to an area with boxes and tables, yet another Bonestick will charge you while his Pistol friends take potshots from behind some cover, so deal with them, and then grab the HE Grenades in that area waiting for you along with a resupply of ammo.

Around the corner there are three vending machines which will give you a little cash if you loot them. Progress through the bedroom while picking up ammo, and if you're sneaking, you can shoot a clan member in the back of the head.

Move through the doorway where you're in for your final firefight of the level. There are two Pistols you can snipe from up high, two more you can get through a hole in the wall as you come down the stairs (don't forget to pick up some Beer Bottles before going down), and two final ones in the corridors just after you pick up some HE Grenades. Loot the vending machines, and then you can grab the zipline and ride down. In a box on your right as you exit you'll find some Books and Food Cans so grab those too, if you haven't already.

Jump on the Jetter and head back to the Hagar Settlement. If you've bought the Anarchy or Campaign edition of the game, stop near the Dam Facility and see Steiger, the old guy in the tent. If you're feeling brave (remember, you have no armor), you can visit your first sewers, the Ark Area Sewers, right away. Also consider scoring your first Field Goal, both to advance towards getting the Achievement/Trophy "It's Good!" and just for fun. And don't forget to pick up the Dagger Thrower card above the Wasted Garage entrance. Once you're at the settlement, you might want to grab the three Collector Cards in the area, if you haven't already. Once that is done, talk to Dan to get your reward of armor and cash. 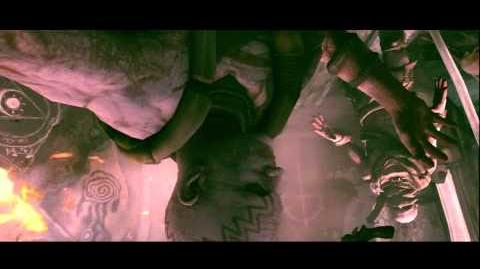