The Authority Predator is a vehicle featured in RAGE. This is the vehicle type used by the Authority. They will be first fought after receiving the quest "Assault the Authority Bridge" in Subway Town.

The Predators are armed with Pulse Cannons which can destroy even heavy Monarch armor quickly, and will kill Nicholas Raine on foot instantly. Those vehicles are heavily armored and can take a lot of punishment, but a single shot from the Monarch's Pulse Cannon will destroy them. The protagonist never gets the chance to drive one, however one can be seen guarded by Authority Enforcers near Saul's Garage before the quest "Assault Capital Prime".

Both Brick Johnson and Sally LePrine will reward the protagonist generously for destroying the Authority Predators.

In 2165, the Authority still used a variant of Predators, the Xerxes III. 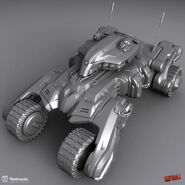 In the Northern Wasteland
Community content is available under CC-BY-SA unless otherwise noted.
Advertisement