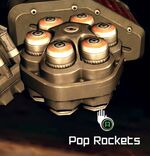 Pop Rockets are an ammunition type featured in RAGE. It is utilized by the game's present shotguns, the Combat Shotgun and the Double Barrel Shotgun[1]. The rounds' functionality is similar to that of a grenade launcher ammo.

This ammunition is effective in taking out groups of weak targets, single armored enemies, and also excels in stunning larger opponents, as it has a knock-back effect on the enemy. This can potentially give the player a chance to recover during an intense fight. Note that though Pop Rockets do not suffer from any horizontal spread, they travel in a downwards arc, so the player will have to compensate for this loss in range and aim upwards to successfully target enemies who are farther away.

The explosion is not as damaging as that of HE Rockets, and its area of effect is smaller; because of this they are highly effective against mutants (Authority Mutants included) even in close quarters, as the explosions do little damage to Nicholas Raine. Note that no enemies utilize the Pop Rocket ammo against the protagonist, nor do any friendly NPCs use it while aiding him, though there is one exception: the Gearhead Boss in the Power Plant use some ammo that is very similar to the Pop Rockets.

The Pop Rockets are created via the corresponding schematic, once it has been purchased. The protagonist can also purchase Pop Rockets from various vendors throughout the Wasteland.

The schematic creates 10 Pop Rockets with the engineering bonus gained by wearing the Fabricator or Crimson Elite[2] armor, and 8 without the bonus.

The components required are: