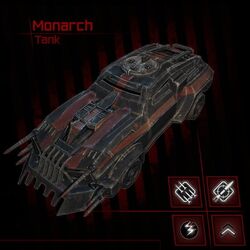 The Outlaw is the third of five different vehicle types featured in the multiplayer mode Road Rage in RAGE. It is unlocked at level 10 and uses the Tank (Heavy armor upgrade) theme by default.

Being a Monarch, this vehicle is very powerful and durable. The player may feel at ease playing against level 1-10 enemies as they're advantageous. The player may also freely begin and engage in fights as almost nothing below this vehicle can destroy it. The player should be wary that although this vehicle is tough, it stands no chance against the higher level Executioner and Boss vehicles, as they are armed with Pulse Cannons. This vehicle is best used on the Meteor and Prime maps.

The player should consider switching their Nailspreader to Pulse Repeaters at level 12 as the repeaters are much stronger than their minor counterparts. Also, it's recommended to upgrade to Cluster Bomb soon after acquiring this vehicle as it's much more powerful than Homing Missile, and replace Air Burst with Hover Turret at level 11, as the turret is more useful than the Air Burst.