RAGE Wiki
Register
Don't have an account?
Sign In
Advertisement
in: Characters in RAGE, Residents of Wellspring

Olive is a minor character featured in RAGE.

Nothing is known of Olive's early life. She is a resident of Wellspring.

In 2135, when Nicholas Raine first arrives in town, she complains to him regarding the Authority and their role in shutting down Jackpots, the local casino.

Following this interaction, she can most often be found by Jackpots sign or outside Mick's Garage. She will occasionally comment on Raine's recent actions, at one point warning him that causing trouble for the Authority will cause trouble for Wellspring.

After the Authority occupies the town, she will warn Nicholas to lay low, encouraging him to leave town in order to evade capture. 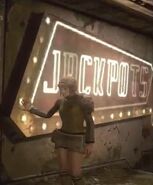