The Northern Wasteland, often simplified as just The Wasteland, is the beginning area in RAGE. The protagonist Nicholas Raine begins his journey here, helping the inhabitants and undertaking various quests until about halfway through the game, where the player gains entrance to the Eastern Wasteland. The environment consists of lightly-colored hills and canyons, spread across wide rocky valleys. It is bordered by the Dead City to the North, and the town of Gunbarrel in the Southern Territories. It is the most civilized part of the Wasteland, as the player can interact and trade with multiple non-hostile settlements, as well as take on jobs for the Stanley Express delivery service that connects the region's major locations, including the famous Mutant Bash TV show. A tower broadcasting the Wasteland Radio station is also located here.

The town of Wellspring, the local capital and "safest place around", is found in this part of the Wasteland, as well as the smaller Hagar and Outrigger settlements. While initially suspicious of outsiders, these settlements all eventually welcome Raine by providing various services. The small settlements provide basic weapons, ammunition, crafting components, and schematics for trade. The player gains most of their weapon arsenal in this area, namely from Dan Hagar, as well as the second vehicle, the Dune Buster. The town of Wellspring, the first true civilization Raine finds in the new world, offers him advanced items and schematics, and a lot of challenges, and also houses the local Resistance base.

There are also a few bandit clan hideouts, multiple sewers (Wasteland Sewer Missions DLC required), the Authority Prison facility and the mutant-infested ruins of a megalopolis now known as the Dead City. If not for the bandit patrols, the Northern Wasteland could be considered a rather friendly area. This generous land gives life to different plants the protagonist can use, like the Night Blossom and Desert Spore, and a lot of useful items can be found there, including some precious Feltrite Crystals.

To the south of the Northern Wasteland lie the Southern Territories, the region of the Wasteland the protagonist is never given the opportunity to visit.

Eventually the two major forces of the new world, the Authority and the Resistance, will show up in the Northern Wasteland and start their struggle in its territories. After a few fights with the Authority forces and participation in some Resistance's actions, the area becomes too dangerous for Nicholas to stay in, and he will have to leave to the Eastern Wasteland, where he will meet more challenges and find some new friends. 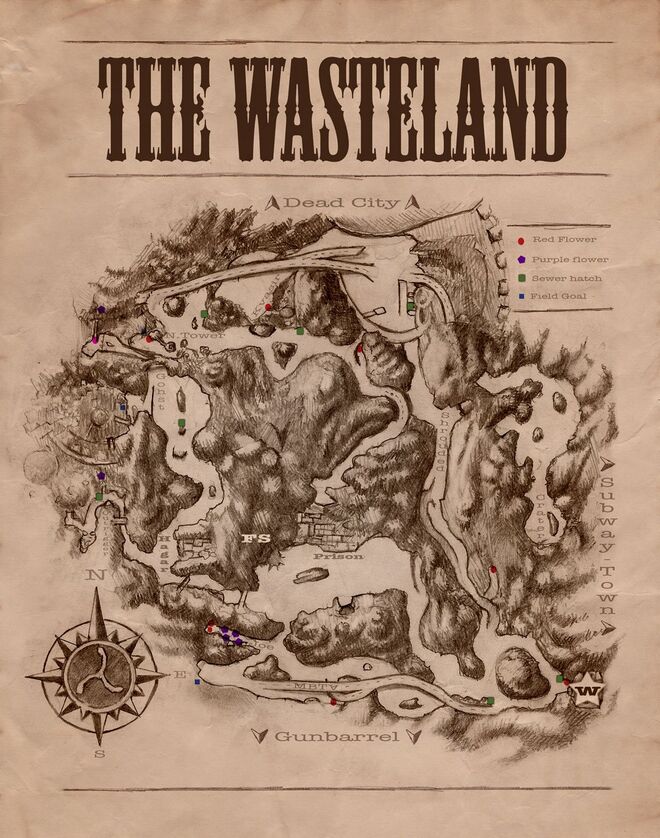