Lieutenant Nicholas Raine, also known as the Protagonist, is the silent hero of RAGE. A former marine, official artwork displays him as a man with a military buzz cut. He is of indeterminate age, presumably in his mid 20s to early 30s. During the events of the game, his past is largely unknown, and his actions in the world post-99942 Apophis are only based on how the player chooses to play RAGE.

Before Apophis hit, Raine served as a Recon Marine, operating throughout the world. His father and brother before him were both decorated Marines, and out of a sense of duty, he chose to follow in their footsteps and enlist. His brother was killed in the line of duty, with his father passing away shortly thereafter. After their deaths, Raine became a decorated and respected Marine as a way of honoring them. However, the frequency and nature of his missions in various brutal conflicts worldwide would eventually begin to take their toll on his psyche. His last mission is inferred to have been in Afghanistan.[citation needed]

Two nights before the asteroid hit, Raine was at a club in Brooklyn. Upon leaving he was approached by a shady individual who told him little other than that he was an agent of the U.S. government and that he had to come with him. Raine, out of a sense of duty, followed. He soon found himself on a private jet, hurtling across the country to an unknown destination. Ark 437a, one of the last to go under, was where he found himself. He was to be the Ark's military adviser when tests revealed that the first choice, Raines old commander Captain Stephen Hill, had cancer. Injected with experimental Nanotrites, Raine was then cryogenically frozen before Apophis struck the Earth. Over the years, Raine's Ark suffered a severe cryogenics malfunction as a result of seismic activity, which killed nearly every inhabitant on the Ark. Raine was the only survivor.[citation needed]

Raine's Ark emerged in 2135, two years after it was planned to emerge and after it was rendered unusable by seismic activity. This emerging makes him the most recent Ark Survivor known at the time. Around him all the other Ark residents were long dead, and with its vital systems damaged, the Ark had been rendered utterly useless. He then left the Ark and began exploring the world outside. Raine found ruined cities and barren wastelands, filled with gangs, mutants and a secretive organization known as the Authority, whose agents hunt down other Ark Survivors, including Raine himself.

This forced Raine to join the Resistance, infiltrating on the Authority headquarters, forcing all remaining underground Arks to surface, giving the Resistance a key reinforcement of people and equipment.

Nicholas Raine makes an appearance in RAGE 2 during the mission 'Cult of The Death God' as an old mysterious man. He asks the player character to deal with the local mutants who are killing in the name of their Death God.

He appears to have grown rather sickly during the years between the two games, having developed a severe cough and an unhealthy look to his skin. 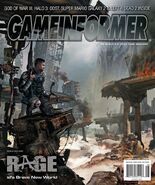 From the Launch Trailer 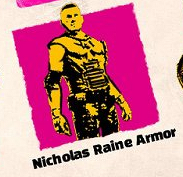 Raine in a promo for RAGE 2 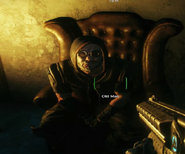