The Nail Gun is a weapon featured in RAGE: The Scorchers. Its model resembles that of a standard real world Nail Gun but has been extensively modified to fire Nails and Coils as full projectiles, hence the name of the ammunition and the weapon itself. Though it is only seen in use by Sarah in-game, upon nearing the end of the quest "Rumbles in the Dark", Sarah will give the protagonist the Nail Gun to help him in the assault on The Refinery during the quest "Scorched Refinement".

The weapon's basic ammo, Nails, shoots at a very high rate of fire, but is rather inaccurate and does only moderate damage, making it ineffective against the Scorcher heavies. The Rebar shot is very powerful and can be used to stick unarmored enemies, or parts of enemies (the head especially), to walls in a humorous fashion. Rebar shot is also extremely effective against Authority Enforcers. The Railgun Slug is one of the most powerful types of ammunition in the game and, upon switching to it, the game adds a scope to the Nail Gun. This scope allows the protagonist to see and shoot enemies through walls while hidden. This ammo type also works on multiple enemies at a time.

Despite the weapon having no official modifications, the three different types of ammunition all change the barrel of the gun. The Nails ammunition is the basic model of the weapon, seen in the image above. The Rebar ammunition changes the gun muzzle to resemble that of a crossbow. Finally, the Rail slug adds a scope onto what appears to be a Sniper Rifle barrel. 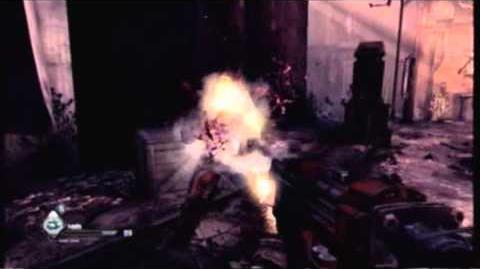 Sarah giving the Nail Gun to the protagonist