Mutant Menace is a job board quest in RAGE acquired by the protagonist from the Job Board in Wellspring. It is available after completing the quest "Wellspring Bound".

Mutants are destroying our water lines!

We need a Sharp Shooter to provide Sniper Cover while our Worker repairs the equipment. If we don't stop them, the Mutants will cut off water to Wellspring. If you accept, the job begins immediately.

We'll pay you if you can keep the Worker alive.

Upon accepting the quest, Raine will be given the semi-automatic upgrade for the Sniper Rifle, which will come in handy right away. You will start this quest with more than enough ammo to complete it (approximately 250 Sniper Rounds), so there is no need to stock up on ammo before starting.

The quest begins with the player on a sniper nest. Shoot the lone mutant at the left water tower, or two others that are hiding below you. A worker with a guard will then spawn below your nest and proceed to the left water tower. Both NPCs have their own health bar, and they will die if they take too much damage. The quest will continue if the guard is killed, but fails if the worker is killed.

Once the worker begins repairing the left water tower, mutants will begin to rush them. The mutants normally spawn from the road on the left first, then from the road on the right, alternating. Take out the mutants before they reach the guard, and be careful not to shoot the guard, as he can take damage from your shots. This pattern repeats until the worker has completed repairing the left water tower, at which point he and the guard will advance to the water tower to the right.

The second wave of mutants start from the road on the right. Unlike the previous wave, however, mutants will advance from both roads simultaneously, so take them out as soon as they are spotted. If you ignore the mutants coming up the left road, they will reach your position in the nest and you'll be forced to deal with them up close. Once the right water tower has been repaired the quest completes, the worker and guard (if still alive) will return to the entrance to their bunker below your platform, and you'll return to Wellspring. 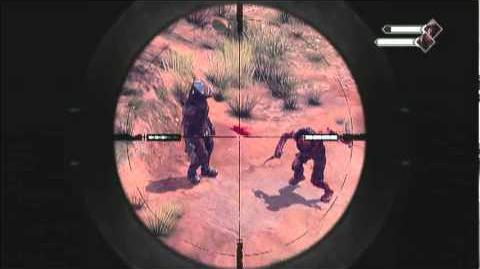