The Monarch is a vehicle featured in RAGE. Only Subway Town Speedway star racers and some bandits are known to drive Monarchs. It wouldn't be an exaggeration to say that the Monarch is the best vehicle in the Wasteland. It can enter the most challenging Monarch class races.

The Monarch is a heavily armored combat car that carries both the Miniguns and Rocket Launchers plus a Pulse Cannon, a rare and very powerful vehicle weapon. Its basic armor is twice as tough as the heavy armor for the Cuprino, and can be upgraded even further.

In the Campaign, it is only available after completing the quests "Starky's Monarch" and "Monarch Needed". 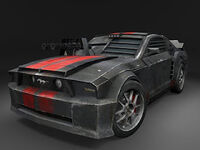