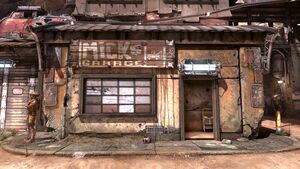 Mick's Garage is a location featured in RAGE. It's an autoshop located in Wellspring that is owned and operated by Mick.

This becomes Nicholas Raine's first garage after Mayor Clayton requires him to rent a garage space for his vehicles during the quest "Renting a Garage". Mick agrees to rent out the space on the condition that Raine comes to him for all of his mechanical needs.