"Medical Supplies" is a quest in RAGE given to the protagonist by Dan Hagar in Hagar Settlement. It is available after completing the quest "Quell the Bandit Threat".

Bandits raided the settlement, and we need your help again.

We held them off, and, thank God, no one was killed. But, we are in desperate need of Medical Supplies. I need you to head West to the Outrigger Settlement and give this letter to their leader, Rikter; he'll know what to do.

You make it back with my Medical Supplies, and I'll have our local mechanic fix up a Buggy for you.

After the protagonist gets back from making the Northern Wasteland a better place, Dan Hagar tells him about the unfortunate attack on the settlement. Luckily the settlers managed to repel the bandits, but many people got injured during the attack, and the settlement is running dangerously low on medical supplies. With a low amount of supplies the protagonist is tasked to get some from a nearby settlement.

It's the Outrigger Settlement where the protagonist must give a letter to the person in charge thoroughly describing what supplies the Hagar Settlement needs. After a relatively short drive to the settlement Raine is directed to the man in charge called Rikter Outrigger. Rikter allows him to pass. The protagonist then meets Janus Outrigger who agrees to provide the supplies if they can find Juno, one of the residents that went missing (see "Where's Juno"); at this point the player can pick up the Janus Outrigger card. When leaving Janus, the Nicholas will become stuck with Rikter until he agrees to accept his mission "Radio Tower Repair".

When the player completes the side missions and get the supplies needed, they ride back to Dan Hagar who will be thankful for the supplies. 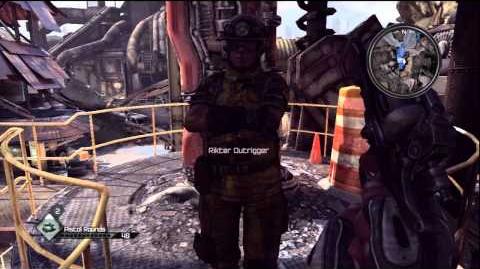