Loosum Hagar is a character featured in RAGE and RAGE 2.

Loosum was born sometime around the year 2118, the daughter of Dan Hagar. She is the sister of Phallinx Hagar and a niece to Durar and Halek Hagar.

In 2135, after Nicholas Raine is rescued by Dan and brought back to his home, 17 year-old Loosum offers to train him in the use of wingsticks. If Raine completes the training course to Loosum's specifications, he will be able to purchase wingsticks from her uncle, Halek.

In the novel, Loosum has a larger impact on Raine's actions, providing more information on the surrounding wasteland upon their first meeting. She is later taken prisoner by the Authority after Dan is captured, interrogated, and fails to provide information on Raine's whereabouts, in order to prevent the Authority from capturing him. Later, as Nicholas enters the Authority Prison, she is found alongside John Marshall as a prisoner. She gives her life battling a horde of mutants to allow the protagonist and the injured captain escape.

Loosum, as all her family, joined the fight against the Authority, making alone a lot of risky intelligence or assasination missions. In one, she was captured by a group of Rangers, because Loosum was to kill by mistake one of their people. After the end of Authority Wars, Loosum, as others Resistance leaders, secretly signed Project Dagger, a secret pact against the suspected not so destroyed Authority.

After the war ended, Loosum became Wellspring's ambassador, negotiating deals with other groups. In 2165, she had become Wellspring's Mayor, having taken over following her father's own stint after he died. Soon began suspecting about her rival, the richest man on town, Klegg Clayton. The same year, she suffered a massive assault and intent of assassination by Goon Squad bandits, being saved by the last ranger, Walker.

Walker wanted to launch Dagger, and Loosum agreed... if he helped her to uncover what planned Clayton. After hacking Klegg's files, Loosum uncovered than Clayton was working for the Authority, and ordered her forces to assault Clayton's tower, but Klegg escaped. Loosum ordered the recovery of an Authority tank, Xerxes III, from Clayton's dungeons, to assist Walker, and send him to track Clayton in the Goliath Base.

Walker returned from there with the power core for the tank, and the news of Clayton's execution, by orders of General Martin Cross.

Loosum continued assisting Walker until he managed to use Dagger tond kill Cross. A wounded Walker was carried to Wellspring, where doctor Anton Kvasir healed him, in Loosum's bureau.

An early concept of Loosum by artist Ben Olson

An early concept of Loosum by artist Ben Olson. 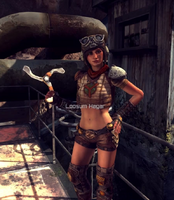 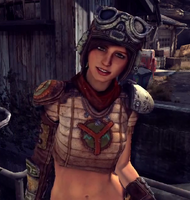 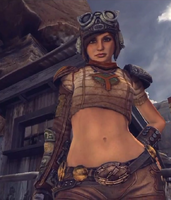 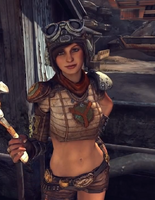 Loosum as she appears in RAGE 2.