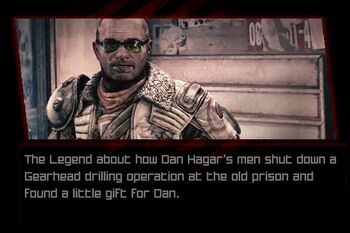 "Life in Prison" is the first Wasteland Legends co-op mission in RAGE.

Check the starting room. There's an ammo stash with some Fatboys nearby and a Wingstick on a table. Follow the passage to the left to pick up more Fatboys, then crouch and enter a cell to pick up a HE Grenade in the WC. Head back and use the triggers, then head out of the room. Enter the first open cell to the right and activate WC to get your first clownface collectible, then check the other open cells for two Bandages. Leave the segregation unit, take a HE Grenade in a cabinet ahead and continue to the officers' lounge.

Pick up you first RC Bomb Car at the table to the left and a Wingstick on the nearby sink. The Gearheads in the storage room ahead are likely to notice you while you do it, so stand close to the door and shoot them all. There will be a few Gearhead ARs who will utilize cover actively and try to throw grenades, and a couple of Gearhead Clubs who will try to rush you. After they're all dealt with, head through the door and take your time to loot the area.

Go down the stairs and through the short corridor. Head to a pile of garbage in front of you to pick up some Fat Mammas hidden on top of it and start shooting the Gearheads. Don't head forward yet: while you stay behind the bars, the enemies won't be able use grenades, and the three Clubs that will appear are going to have to come through the doorway in front of you when they try to rush you. Shoot them all, then loot the area and move through the archway. Don't miss a Lock Grinder in a box to the right and head up the stairs to get a mission update.

There will be a lone Gearhead to the left as you enter, so shoot him and head all the way forward to pick up a grenade near a mattress. Return back to enter the area where the Gearhead was and enter a small dark room to the right to pick up one more grenade from a table. Don't come close to the two Bandages yet, instead grind the locked door to find some loot including the AV2x Rounds, and follow the narrow maintenance passage to enter a cell with more AV2x Rounds along with other useful items. Return to the big room to pick up the two Bandages and start some enemy activity. Use the ammo stash to resupply, pick up a grenade to the left of it and move through the doorway to use a trigger. You'll find a grenade in a first open cell to the right, and a Wingstick in the last one. There is a grenade in the second open cell and a passage to the next area of the Prison.

Shoot the Gearhead AR to the far right, but don't head down yet, instead go through an open cell to the right and to the end of the narrow passageway to pick up a grenade. Enter another cell on the way back for some goodies and return to the open area. Head down and shoot a Club along with an AR to the left of a closed passage marked "Cutoff". Pick up some Fat Mammas in one of the WCs, and more in the nearby cell. Head up the stairs in the corner to use another trigger and pick up some Fatboys and the last AV2x Rounds available. Pick up some Bandages in a now open cell and head to the narrow maintenance passages where you'll find Pop Rockets and the second collectible clownface. Now head back down and use the passage in the cell the Club and AR came from. Note that this is a one-way passage: you'll get injured if you try to use it to go back from the cell.

There are quite a few Gearheads in the area, and they will have some reinforcements. Try staying in the cell if you don't want to seek cover from often grenade explosions. A Gearhead Jet will appear soon after you engage the ARs and Clubs, so be prepared to switch to the heavy ammo you prefer. After you're done with him, move through the nearby cell and use cover to take out the rest of the bandits. There is a passage in one of the cells on the opposite side — use it to leave to the next area where you'll find another ammo stash. Once resupplied, head up the stairs and to the warden's office, for the Sniper Rifle and a mission update.

Grab the rifle and head to the right if you want to fight the Jet that will be coming up the stairs (don't miss a bomb car and HE Grenade), or to the left if you want to deal with him a little later. The ARs down there will keep throwing grenades, so keep moving to avoid explosions and use the rifle for some headshots. Once done in the area, head down and prepare to see a few more Gearhead ARs. You can fight them there or return back up and keep using the Sniper Rifle, but beware of a Club that will come up the stairs to get you.

Once done with them, pick up the third clownface collectible and shut down the drill. More Gearheads will come after you do it, including another Jet, so follow the last mission update and kill them all. 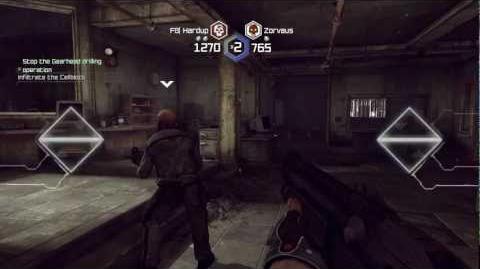