RAGE Wiki
Register
Don't have an account?
Sign In
Advertisement
in: Article stubs, Characters in RAGE 2, Residents of Wellspring
English

Klegg Clayton is a character and minor antagonist who appears in RAGE 2.

He is the son of Clayton, the former mayor of Wellspring. He became the richest man not only in the city, but of all the Wastelands, living surrounded by luxuries in the skyscrapper Klegg Tower, but still wished more: the place of mayor. As the current mayor, Loosum Hagar, was very popular, and Clayton cannot throw her out, he make a deal with Martin Cross of the Authority for obtained the Wellspring leadership. But didn't work very well as the General grow impatient of his failure.

In secret, Clayton made a deal with the Goon Squad, and send a team to murder Loosum, but ir failed thanks to the arrival of the last of the rangers, Walker. Loosum tell Walker what she suspects about Clayton, and the ranger become famous thanks to his victory in the races in Chazcar and Mutant Bash TV.

Ignoring that, Clayton invited Walker to his penthouse, expecting to recruiit him, but then he received a phone call. It is unknown who called him, if an Authority agent or an spy, but warned Klegg about the ranger's real intentions. When Walker attempted to leave the place, Clayton throw him to the building's underground dungeons through a trap in the elevator. There resided Jumbo, Klegg's pet, a giant Crusher, but the ranger managed to kill the mutant, the Goons filling the dungeons and escpae.

Clayton doesn't know than Walker had put an spy bug in his computer, sending the major all Clayton's files. Knowing the real intentions of Klegg, Hagar send her troops to storm the building. However, before they can capture Clayton, he escaped on his Icarus copter.

Walker, thanks to Loosum's files, tracked Clayton to the Authority Goliath Base, on The Wilds. There he found Clayton's crashed Icarus, and inside the facility, saw an interview between Clayton and a virtual image of Cross. Klegg asked for help to take Wellsprings, but Cross refused and recognized that he only had used Clayton to give his forces access to the city, without intending to fulfill his promise of give Klegg more power. Clayton became enraged, promising revenge... but in vain: as he had proved usefulness is over, Cross ordered his controlled mutants to kill Klegg, and he was eliminated seconds later, despite a futile attempt to bribe the mutants.

Cross, when ordering Klegg's execution, ordered the mutants to leave his face intact, to keep his body as a trophy. It is unknown if he ever take it, as Walker destroyed the base right after. Ironically, Clayton asisted indirectly at Loosum and Walker's objectives: the realization of Project Dagger required an Authority tank... like the one they found, half dismounted, in Clayton's dungeon. It was used by Walker to infiltrate the Authority's headquarters and kill Cross.

Like other rich men, Clayton was unable to be satisfied with his money, wanted also politican power. With a bloated ego, was surrounded all the time by tasteless status symbols, famous people, sycophants and yes men. Very arrogant too, that makes him too confidant, and very easily manipulated: he never suspected Walker was a spy, or that Cross was only using him and planned to get rid of him as son as he didn't need him.

Beside an Xerxes III, probably a present from the Authority, but which power core had been stripped, Clayton also obtained a Rangers Icarus, customized in black and gold paint, which keep on the top of his building and used to escape the arrest of Loosum's guards. 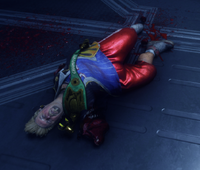 Klegg Clayton body after killed by the Authority Mutant.

Klegg Clayton shares many similarities to Biff Tannen, a villain from the Back to the Future films. Clayton's's wealth, power, and mannerisms are similar to Tannen's from Back to the Future II plot, including a self portrait akin to Klegg's own portrait. http://timetravelnexus.com/wp-content/uploads/2016/09/IMG_0421.jp