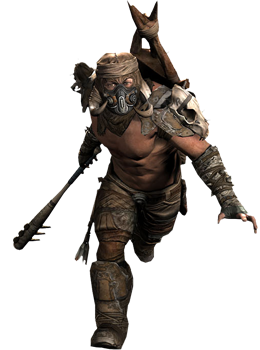 The Jackal Clan is a bandit clan featured in RAGE. Part animal and part man, the Jackals are a savage group of hostile hunters who reside in Jackal Canyon.

The Jackals act more like a pack of wolves on a hunt than a trained military force. They adorn their bodies with bones, furs, and animal scalps, giving them a beastly appearance. They are incredibly strong and resilient, and although they wear little armor, they can shrug off bullets with willpower alone. Like the Ghost Clan, they prefer to use melee weapons as opposed to firearms, although they can and will use a variety of guns against the player.

They are a menacing sight, utilizing scare tactics to great advantage, much like the Wasted Clan. This is evident when a group of five mutants which had recently butchered another clan group hesitate at the mere sight of only two Jackals. Unlike the Wasted however, the Jackal Clan make for formidable adversaries, especially when encountered in groups. They are the only clan that does not speak English; instead muttering a few simple types of gibberish like "Ke-ke-le Pe-ke-le" ("Que-que-le Pue-que-le") and "Killah Humana."

Jackal Clubs are the most common clansmen encountered. They rush in to attack the Nicholas Raine, dodging like Ghosts or mutants, and hit hard. It is therefore advised to make every bullet count by aiming for headshots with powerful ammunition types like Fatboys or Fat Mammas. Dynamite Bolts are also useful, but bear in mind that exploded enemies cannot be looted for money. If encountered by groups at a distance, the player should consider using Mind Control Bolts as well. Like the Ghost Bonesticks, they will throw axes at the player, if within effective range.

Armed with Striker Crossbows, the Jackal Crossbows will tend to keep their distance while firing Dynamite Bolts. Fortunately, they're easy to dodge, and the player can shoot them with the Sniper Rifle once they cease fire. Their attack is similar to the scoop mutant, except instead of throwing the projectile, they actually deploy it using crossbows.

Rarely encountered, the Jackal Pistol will stand back and shoot the player from a distance. Deal with them like any other pistol-armed enemy, but take into account their high health. They seldom take cover, often leaving them susceptible to a blast from the Combat Shotgun or with the Anarchy Edition, the Double Barrel Shotgun.

They use the NPC version of the Settler Pistol, which is unavailable to the protagonist.

Like most enemies armed with the Combat Shotgun, the Jackal Shotguns slowly proceed towards the player character to attack at close range. They are very dangerous on Nightmare difficulty as the player can die from just a few shots.

Although using ranged weapons is recommended, it is important not to be taken by suprise, such as when nearing the spiraling path down to the Ark.

A decent amount of Jackals are armed with Settler Assault Rifles and will try to distract the player with support fire while a couple of others close in for melee. They complement the Jackal Crossbows to provide a legitimate long-range threat, so the player should consider taking cover while keeping a few Bandages handy. They rarely take cover but can dodge the player's bullets by rolling away from fire.

A promo image of a Jackal clansman in the clan's territory

A different version of the Pistol

A Jackal clansman, as seen in the "Fame and Glory" trailer
Community content is available under CC-BY-SA unless otherwise noted.
Advertisement