"Mutant Bash TV"
J.K. Stiles is a supporting character featured in RAGE. He is the host of Mutant Bash TV, the most popular show in the Wasteland.

Nothing is known of Stiles' early life. By 2135, he has been the host of Mutant Bash TV for some time, which he films out of his studio located in the Torn Plains. The premise of the show features an armed contestant tasked with fighting off several waves of mutants in themed rooms. His show is also produced out of a second location known as Mutant Bash Canyon.

During the "Season 1: Pilot" mission featured in Wasteland Legends, the narrator describes the events surrounding Stiles' first attempt to film an episode of his show, though too many mistakes were made for him to air the episode. Later, in the "Extermination" mission, Stiles' mutants escape from their enclosure and he again hires two armed men to clear out his studio and secure the area.

In 2135, Nicholas Raine is tasked with earning a sponsorship from J.K. Stiles and his show in order to participate in the Dusty 8 Sponsored Event. Stiles promises Raine a sponsorship for the race only if he participates in an episode of his show. After completing the episode, Raine is provided with a custom Dune Buster for use in the race.

Stiles then provides "The Re-Run" quest, in which he offers Raine a chance to participate in another episode of his show.

In RAGE: The Scorchers, after Raine and Sarah confront Clive in Wellspring for information regarding the Scorchers bandit clan, he must once again make his way to Stiles in order to acquire a ticket to Oasis, a distant community in the Dune Sea. Raine must participate in yet another episode of Mutant Bash TV, this time in Mutant Bash Canyon.

After or during the Authority Wars, J.K. Stiles banished without leaving a trace. He was replaced in front of Mutant Bash by Desdemonya Cold, which gave her a different, more glamorous aspect, but Stiles wasn't forgotten: masks of the round, white haired and smiling face of Stiles were present everywhere, from the publicity pannels, to actors, and even arena mutants. 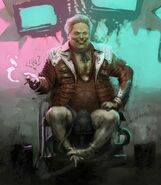 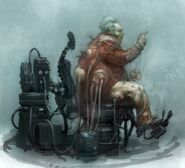 An early concept of J.K. Stiles by artist Ben Olson

J.K. Stiles at the MBTV controls

From the Launch Trailer