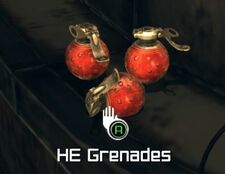 HE (High Explosive) Grenades are a weapon type and ingredient used to create engineering items in RAGE. When being primed, the grenades explode after a few seconds. It obliterates any enemies close to it when it detonates. It can be "cooked" so it will detonate more quickly and so enemies will not be able to flee as often.

The grenade's explosion might destroy the enemy's body which makes it impossible to loot from.

HE Grenade is used as an ingredient in EMP Grenades schematic.