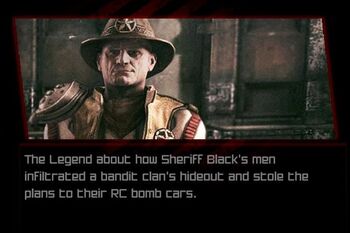 "Grab and Go" is the eighth Wasteland Legends co-op mission in RAGE.

The players start near the bunker entrance. The first ammunition stash is a short distance ahead. There will be three Shrouded in the area ahead, and three more will appear after the team blows the electrical box. The next ammo stash is just before the lift, along with some useful loot (Bandages and HE Grenades) on the shelves and a Sentry Turret on the floor.

Three Shrouded will be waiting the players in the corridor at the lower level, and about ten more will appear in the room ahead, including an Armored Shotgun. When they are dealt with, it will be safe to pick up the first collectible clownface under a cargo platform to the right of the entrance, as well as some ammo (Fatboys and Feltrite AR Rounds) and a grenade. One or two more Shrouded will be in the corridor near the locked door, and the next ammo stash along with some Bandages.

After the players go through the large pipe, a few shrouded will meet them on the level, and about half a dozen will appear downstairs. There are quite a few useful things scattered around the area — RC Bomb Cars, another Sentry Turret, etc. The second clownface collectible is hidden behind a decking in the far end of the area that leads to the lower level where a lot of boxes stand.

There are two Shrouded in the next area, and a few more will appear soon, including an Armored Shotgun. After they are dealt with, it's time to pick up all the loot in the area, including a Lock Grinder and the third clownface collectible behind the box where the Lock Grinder was. The last ammo stash is to the right of the safe with the bomb car prototype, the mission's objective.

Six Shrouded will appear in the next after the prototype is taken, two on the lower level and four up the stairs. It's best to head up the stairs to the now open door and stay behind the cover while fighting 6-8 Shrouded in the next area. Two more will appear on a platform when the players head to the locked door. There is the last ammo stash behind the door and a lot of useful loot, including Pop Rockets, one more Sentry Turret and Rocket Launchers that will come in handy soon.

The lift the team used to descend is taken to the upper level of the bunker, and so the players will have to use another way out, the gates on the opposite side of the area that will soon open letting a bunch of Shrouded through. After they're dealt with, it will be safe to loot the area, picking up some HE Rockets. The next area contains about a dozen Shrouded, and when the end of it is reached, another lift will come down bringing a Minigun. Rocket Launchers should help dispatch him pretty quick, and the mission will be over when the players start the lift.