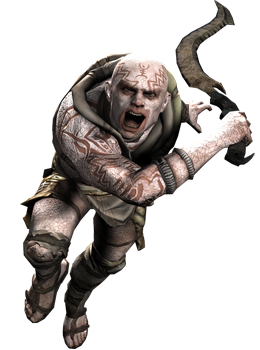 The Ghosts, also known as the Ghost Clan, are one of the bandit clans featured in RAGE. They are the first bandits Nicholas Raine encounters. They have taken up residence in the old hotel, "The Rutherford." One can find occult symbols and drawings around Ghost Territory and in the form of tattoos on their bodies.

The Ghosts return in the RAGE 2 expansion Rise of the Ghosts under the leadership of the ambitious former ranger, Iris.

The Ghosts are fearless, intelligent, and agile combatants who possess the ability to jump, crawl, and navigate their surroundings both efficiently and effectively. They attack with grace, speed, and brutality. They may attack from any direction, which can potentially disorientate the player. In combat, the Ghosts exhibit astonishing mobility, leaping from catwalks, over walls and rubble, and dodging to stay out of the player's iron sights. They can close the gap between themselves and their targets very quickly, making their melee-class similar to the basic mutant, albeit significantly more durable and crafty. They can be found in dark, forgotten and abandoned places where they decorate their surroundings with graffiti and grisly trophies of their victims. Most of them have bone daggers called Bonesticks which can be used to eviscerate their enemies. Some of them carry more than one dagger and throw them at their enemies before finishing them. They wear no armor, only the bare essentials so they can maneuver the way they do.

The Ghosts live in an enormous abandoned hotel that appears remarkably intact, with several statues and decorations remaining uncorrupted. The building is covered with their symbols and crude constructions, such as wooden plank ramps and scrap-metal bridges, as well as several grind-rails to help them maneuver if needed. They appear to be largely unaffected by other Wasteland beings. The larders of fly-covered dead bodies, mutilated corpse ornaments and skulls that adorn every inch of their territory is testament to their unnerving presence.

The Ghosts seem to be insane. They thrive solely on cannibalism and meat, and kill violently and indiscriminately. Their disturbing occult symbology, sharpened teeth, murderous intent and their lack of any effort to clean, or at least organize the gore and flies-swarmed blood pools that lay strewn across their domain indicate extreme psychosis. Their threats of devouring their soon-to-be victims make it clear that the Ghost Clan has no issue with a reputation as cannibals.

Two Ghosts, apparently, saw Nicholas Raine's Ark emerge, and tried to murder him, but Dan Hagar killed them, later sending Nicolas to assault the Ghost hideout in the hotel and kill all the Ghosts. Despite being captured and stabbed in the chest, he succedeed in the mission.

After the Authority Wars, a group of Ghosts survived, and managed to capture the unconscious Ranger, Iris, from a battlefield. They wanted to sacrifice her, but after killing a Ghost with her Nanotrites abilities, the other Ghosts fell to their knees and chose her as their new leader. Dubbing her ''the Dead one'', Iris became their prophet, and experimented with the Ghosts, making them mine Feltrite, injecting it into the Ghosts, along with Nanotrites, making them even more crazier, aggresive and powerful. The ghosts nearly controlled all of Overgrown City, however, in 2165 the last Ranger Walker, defeated them and killed their leader, Iris.

The Ghost Bonesticks run in fast, dodging like Club Mutants, and hit hard. They are very acrobatic (even more so than the mutants) and can leap great distances, hang on walls and do flips and jumpkicks. Unlike the Gearhead Club or the Jackal Axe, they don't have armor and have less health so heavier weapons are not needed. Unlike the Gearhead Clubs who only melee attack, the Ghost Bonestick sometimes throw the Bonestick they carry if they are far from the player.

It's recommended to keep the distance and go for headshots with the SAR.

Armed with an unobtainable NPC variant of the Settler Pistol, these Ghost clansmen will not act like their acrobatic counterparts. They commonly use cover like the Shrouded AR, shoot at a distance, and overall try to damage the player as much as possible before they reach them. They can easily be taken out with HE Grenades.

Similarly to Ghost Pistols, the Ghost ARs commonly use cover, shoot from a distance, and act as an annoyance to the player. Due to their unoriginal nature, they are not stronger and are only a small amount more dangerous than the pistol guys due to their use of HE Grenades.

The apparent leader of the Ghost Clan is only seen twice in the game; once retreating inside a zeppelin at the beginning of the quest "Quell the Bandit Threat", and once in a cutscene midway through the quest. He carries an AR and presumably acts like the regular AR guys. He is never fought at all because when the Protagonist uses his defibrilator he is instantly killed. While he could potentially be one of the regular Ghost AR enemies in any one of the Ghost encounters, it is difficult to differentiate between him and the regular AR guys.

See the main article: The Rutherford

From the "Fame and Glory" trailer

Promotional image of a Ghost bonestick
Community content is available under CC-BY-SA unless otherwise noted.
Advertisement