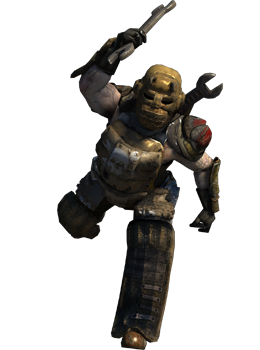 The Gearheads are one of the bandit clans featured in RAGE. They were the most intelligent and sophisticated of the bandit clans, not relying solely on brute force for survival, these bandits built advanced machinery and weaponry that made them a force to be reckoned with. They believe technology is their path to salvation, vowing never again to allow Mother Nature to destroy them.

The Gearhead Clan is the most technologically advanced and dangerous bandit clan in the Eastern Wasteland. And they are highly disciplined and militaristic in nature.

Some believe that the founding members of this group may have been Ark Survivors. Their accents may suggest that they are of former Russian or Eastern European descent, some of them even comment about missing "Mother Russia" and even how some locations remind them of Chernobyl (Ukraine). References to vodka and borsch and Slavic names further imply their Eastern European origins. They also, while angered or hurt, shout: "sookha, blyat," what are actual Russian swear words (something close to "bitch, fuck!"). The Gearheads boss also names the Protagonist as "pidhar" (gay or simply an asshole in Russian).

They all wear body armor making them the most extensive armor users of all the bandit clans; it consists of a combination of thick metal plates (usually on their thighs and shoulders), metal helmets, and purpose built armor that appears to be of former police or military origin (though some parts might be from sports gear). As a result Gearheads are almost as tough to kill as the Authority Enforcers and they are encountered in far greater numbers. Gearheads are skilled engineers and technicians; they often make use of salvaged or reconstructed technology to make their lives easier and to hinder their enemies including custom built flame traps/barriers, flamethrowers, spinning blade traps, electrical barriers, and even the very deadly Advanced Sentry Bots.

The majority of the Gearheads are armed with assault rifles, with some using handguns, shotguns, flaming baseball bats and HE Grenades. They also employ a surprising number of heavy armor suits and not just the standard Minigun soldier variety but also a flamethrower one, which is called Gearhead Jet. A few well-placed shots to the fuel tank will send them flying and later explode. Despite their intelligence the Gearheads are only somewhat more competent than the Wasted. They constantly shout insults at their foes (often while throwing grenades) indicating that engineering skill and discipline don't go hand in hand, but they do make effective use of cover. It's not their combat prowess that's the true threat but the combination of their numbers, tough body armor and relatively good technology (especially their Sentry Bots) that make them a force to be reckoned with. If the player uses crafty maneuvering and AP ammo, the Gearheads are relatively easy to deal with.

Armed with flaming baseball bats, they will always try to go for melee attacks. They are not as common as the Gearhead Pistol, though, despite being common enemies.

On the Nightmare difficulty the player must kill these guys with armor piercing ammo as they can kill them in 2-4 hits.

The Gearhead Pistol enemy is one of the most common Gearhead clansmen and wields an unobtainable pistol that somewhat resembles a Colt .45 M1911. They commonly use cover and will blindfire. HE Grenades are useful when dealing with them.

The Gearhead Shotgun wields a Combat Shotgun when facing the protagonist. They are extremely dangerous, as they can kill the protagonist in a few shots. They should be dealt with fast, as they will try and get close to the protagonist to increase the effectiveness of their weapon. The Wingsticks proved to be useful when dispatching them.

The Gearhead AR is one of the most common enemies of the Gearheads. They wield an unusable variant of the Settlers Assault Rifle. They can easily be killed with Feltrite AR Rounds or Authority AV2x Rounds.

The Gearhead Rocket is the most dangerous type of Gearhead clansmen in RAGE. They are very dangerous due to their use of the Rocket Launcher. They should be the priority of the player as they can easily kill the protagonist, even on the Easy difficulty. They are the rarest Gearhead type in the game, only being encountered once in the final stages of the quest "Gearhead Vault".

Heavily armored, with a fuel tank and a flamethrower, these guys are pyromaniacs. They love to shoot jets of flame at you but can only do so if they are close to you. Though they are heavily armored like the Gearhead Shotguns and Miniguns, they are easier to kill since their tanks are highly susceptible to gunfire. Several rounds from any weapon can pierce the tanks which can propel them skywards only to explode several seconds later in a huge explosion.

Care must be taken to avoid being killed as the Gearhead has no control of his movements once his tank is pierced and may fly towards the protagonist exploding.

The Armored Shotguns are only seen in the Wasteland Legends. Heavily armored and carrying the shotgun, these guys are highly dangerous though less so than the Miniguns since they only fire when close to the target.

It's recommended to treat them like the Miniguns/Jets and keep the distance.

Heavily armored and carrying, you guessed it, a minigun, these guys will tear you apart quickly.

The Rocket Launcher or the Sniper Rifle is an effective weapon against them when shot at the head.

Decked in a red armored suit, he leads the Gearheads across the Wasteland and rarely enters combat. He carries a shotgun with rounds similar to the Pop Rockets ammunition, making him very dangerous.

All Gearheads wear armor and should be dispatched using AP rounds from the Assault Rifle or the Authority Machine Gun, and Fatboys or Fat Mammas for the Settler Pistol. Pop rockets for the Combat Shotgun work well too. Since there are so many of them anyone who has to fight them should stockpile large quantities of armor piercing ammunition, for it is not very common in their hideouts, or make liberal use of explosives.

Note that due to their helmets it is impossible to kill one of them with a single round from the Sniper Rifle to the head, as the first shot merely removes the helmet. However, a second shot to the head after the helmet has fallen off will kill them. Fat Mammas will blow through their helmet and kill them with one clean shot, even on higher difficulties. Their backs are their weaknesses, as they don't have thick armor there to protect their backs. Shooting at their backs with a shotgun or automatic weapons would help kill them faster. However it can be rather difficult to to flank Gearheads since they are often encountered in tight quarters whilst they are behind cover with no way to get close to them other then charging straight at them, and under these circumstances the only way to reliably flank them and hit their unarmored backs would be to use Sentry Turrets or Sentry Bots as a distraction.

Though slow firing and rather inaccurate, the Striker Crossbow is good for piercing their armor, with 5 Steel-tipped Bolts proving fatal to the most of them on Normal difficulty. Electro Bolts are also effective — or, if the player doesn't mind having no corpses to loot, Dynamite Bolts and Mind Control Bolts are potentially very effective versus entire groups of Gearheads. Gearheads are also easily dispatched with the use of Wingsticks.

A different version of the Club

A different version of the Pistol

A Minigun up close

A Jet up close 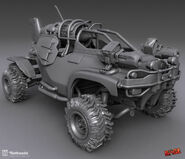 Another image of the Gearhead Boss
Community content is available under CC-BY-SA unless otherwise noted.
Advertisement