RAGE Wiki
Register
Don't have an account?
Sign In
Advertisement
in: Characters in RAGE, Residents of Subway Town
English

Gabe is a minor character featured in RAGE.

Nothing is known of Gabe's early life. He is a resident of Subway Town, and appears to work for Dietrich, the local chemist and a producer of Blueshine.

In 2135, after completion of the "Mutant Expansion" quest, during which Nicholas Raine clears out nearby Blue Line Station of mutants, Gabe will direct Raine to his business partner, Dietrich, a chemist. Dietrich will explain that mutants have disrupted his Blueshine operation at the nearby Abandoned Distillery, and asks Raine to secure a new shipment of the drink, initiating the "Abandoned Distillery" quest.

After the Authority occupies the settlement, Gabe can be found drinking at the Fez bar, and will tell Raine that "the winds of change are blowing." Interacting with him again, he will mention that he's heard rumors that the Resistance is making big moves around the entire Wasteland and that something is going to happen soon.

After destroying the Authority bridge and returning to Subway Town, Gabe can be found in a corner near the main entrance, curled into the fetal position and lying motionless. 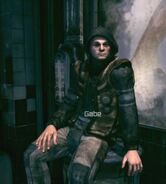