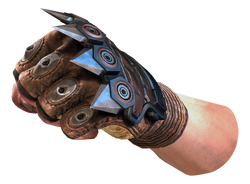 The Fists of Rage are an upgrade for fists that can be received with the Anarchy and Campaign editions of RAGE. They are shown as metal blades strapped to the backing of the protagonist's gloves that allow him to puncture the enemy's armor or skin and deal extra damage. It was showcased in the Well gameplay trailer shown prior to E3 2011.

The Fists of Rage are essentially upgrades to fists in the standard version of the game, increasing attack power by default with sharp knuckle attachments, without needing to be bought as an upgrade to the standard fists, similar to the Ark Armor upgrade. It will kill a human target in one hit if its powerful strike is landed on the face, while it takes about 2-5 hits to kill other enemies, including several armored ones.

In action
Deutsch
Community content is available under CC-BY-SA unless otherwise noted.
Advertisement