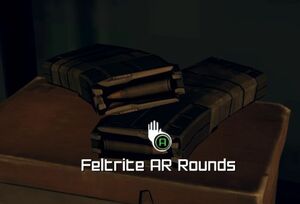 Feltrite AR Rounds are a type of ammunition featured in RAGE. These bluish-green rounds are used with the Settlers Assault Rifle. The structural strength provided by Feltrite allows higher penetration and cause more damage to armored targets.

The Feltrite AR Rounds were first seen in "The Well" gameplay footage. They can be purchased by the protagonist from vendors and are also found throughout the Wasteland soon after finishing the beginning missions.