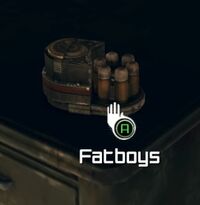 Fatboys is an ammunition type and ingredient used to craft engineering items featured in RAGE. It is used with the Settler Pistol. It can be bought from vendors, found in different locations throughout the Wasteland, or given for completing a quest.

Fatboys do double the damage of the standard Pistol Rounds, but there is a downside: they have half the magazine size with only 6 rounds opposed to 12. They kill unarmored enemies in 1-2 shots, but armored enemies take 2-5 shots to kill. Members of the Jackal Clan take 2-4, depending on location and distance.

Fatboy ammo is used as an ingredient in the Fat Mammas schematic.