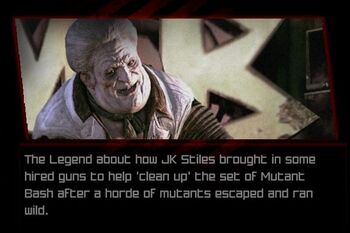 "Extermination" is the seventh Wasteland Legends co-op mission in RAGE.

Four mutants appear when the team reaches the stairs in the end of the corridor, and a few more will come after the players advance forward. There are some supplies on the shelves upstairs — Wingsticks, AV2x Rounds, Sentry Turret, etc. — and the second ammo stash can be seen ahead, but as soon as the team advances towards the stash, about half a dozen mutants will appear from behind. J.K. Stiles will try to close the door to cut off the mutants from the team, but it will stuck half open, and the mutants will climb it and attack the players anyway. By that time, the door to the Shipwreck Cove ahead should also open, and mutants will rush the team from that direction. Some of them will meet spikes, but the rest will try to reach the players.

Once the players are done with the mutants and follow the mission marker to the center of the arena, the arena doors will close and the spikes will start coming from the floor, line by line, towards the team. Soon some mutants will start appearing from different directions, and it's best to keep the spikes in mind while taking the enemies down. After about a dozen mutants are done, J.K. will manage to open the exit and let the players through. There will some useful loot on the shelves on both sides, including HE Grenades and Pop Rockets. The mission's first collectible clownface can be seen on the floor in the corner ahead, but first the players will have to deal with some mutants around the corner, if those didn't come to greet the team already. As soon as the players reach the entrance to the next arena, the way back will be blocked. There are some Pop Rockets on the floor opposite the arena entrance which will come in handy a little later.

Once the players enter the arena, the gate will close and the mutants will start coming from the hatches on the sides of the giant "one-armed mutant." There will be about half a dozen or more of them, and a dozen or so will come from the lift shaft in the center of the arena when those are dealt with. Soon more mutants will start coming from holes under the ceiling on the wall to the left of the "one-armed mutant," and then they'll start coming from all the shaft and hatches as well. After the wave is over, a lift will come bringing a Kraken, and this is the last enemy there.

There is an ammo stash in the corridor along with some extra supplies like Fat Mammas, and the second collectible clownface near the Sentry Turret in the corner ahead. As the team enters the next arena, mutants will start coming from beneath the platform stuck in the middle it. After about a dozen of mutants are dispatched, the platform will come down. The players will have to jump down in the hole to reach the lower level. There will be no ammo stash, but the shelves will provide some useful loot, including one more Sentry Turret.

A Kraken will appear after the players enter the last arena, and eight grunts will come a little later. Turrets put near the walls will take care of some of the mutants while the players dodge the Kraken's attacks and hold off the grunts. After all the mutants are defeated, it will be safe to pick up the third collectible clownface in the corner to the left of the point where the Kraken crashed the wall when it entered the arena. As the players advance into the corridor, more mutants will appear, including a few Slime Mutants, and there will be more of them around the corner.

The mutant mannequin coming out of the wall ahead will be the last surprise the players get during this mission. J.K. opens a door for them, and the mission will be over after they reach it. 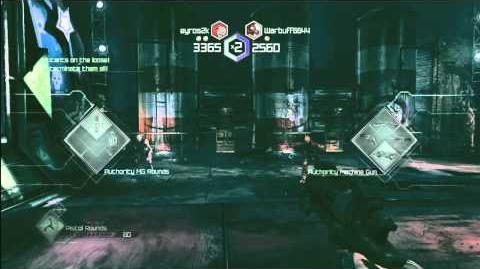