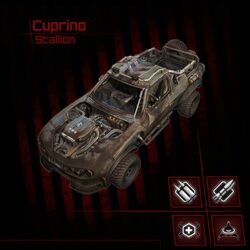 The Enforcer is the second of five different vehicle types featured in the multiplayer mode Road Rage in RAGE. Unlocked at level 5, it uses the Stallion theme by default.

When the player reaches level 6 and the next levels, other variants of Cuprino variants will be unlocked, each featuring new theme:

Default right quick-use item
Add a photo to this gallery
Retrieved from "https://rage.fandom.com/wiki/Enforcer?oldid=39533"
Community content is available under CC-BY-SA unless otherwise noted.