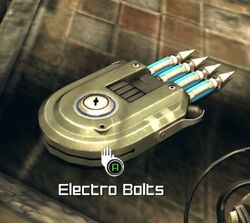 Electro Bolts are an ammunition type featured in RAGE. It is used with the Striker Crossbow. The bolts can be bought from vendors or found in a few locations throughout the Wasteland.

The Electro Bolts are capable of electrifying hit enemies and shocking those who stand nearby, dealing large amounts of damage to the group and likely killing the initial target — or, when being fired at water, electrifying all enemies standing in it, either causing massive damage or killing them outright. This ammunition is effective against all types of enemies, including the Authority troops which are vulnerable to EMP and electrical damage. Headshots will kill the Authority Enforcers and even Authority Mutants with a single hit on the Normal difficulty.

The protagonist can also shoot the bolts at the yellow electrical boxes with the red lightning bolt on them, e.g. the yellow box in the Blue Line Station that will open up the shutters next to it for some secret goods when shot.